Spectral shield
Strength
Immunnity to all of Rayman's attacks

Protect their tunnels before strangers (formerly)

The Knaaren are a race of monsters and villains in Rayman 3: Hoodlum Havoc. They aren't very talkative and usually roar or say only threats to scare their enemy.

They are tall, fierce, invincible and territorial creatures whose attacks are dangerously strong. They live only in the deep, self-made labyrinthine caves and tunnels beneath the Desert of the Knaaren.

They don't like sunlight and strangers. When the tunnels are under attack, one of the Knaaren hits a big gong, calling all surrounding Knaaren to move to the gong's position.

They are ruled by their king Gumsi, although he is just a child. Gumsi is the holder of the Sceptre of the Leptys which can be used to invoke Leptys, the Knaaren's bird-like god.

The Knaaren enjoy battles in their arena where Gumsi's throne is also located. Their champion used to be Reflux and "no Knaaren has ever beaten him". However, after being forced to fight him, Rayman defeats Reflux.

As a reward, Rayman gets a power that allows him to turn Black Lums into Red ones from Leptys. The Knaaren seemly have only one method of attack - swiping their enemy with their large claws. Many Knaaren also have a large spectral shield around them that protect them and does damage to their enemy. Only known Knaaren that don't have this shield, are Reflux and Gumsi.

In Sentinel, one of Rayman 3's minigames, it is revealed that the icy Summit Beyond the Clouds is also home to some Knaaren inhabitants. This indicates that the Knaaren are extremely versatile – not only can they survive baking deserts, but they can also survive frozen mountain peaks. In the minigame, the player controls a pioneering but invading Hoodboom, who lobs plum juice bombs at the approaching Knaaren, which are attempting to defend their territory and destroy the tower. But in the end, they failed. This is the only time the Knaaren are not invincible. 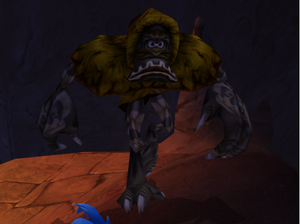 A Knaaren, when he appear in the video game Rayman 3.
Add a photo to this gallery

Retrieved from "https://villains.fandom.com/wiki/Knaaren?oldid=4223183"
Community content is available under CC-BY-SA unless otherwise noted.