Knasty Knight is one of Rita Repulsa's monsters and an antagonist in Mighty Morphin' Power Rangers. He is the archenemy of Zack Taylor the black mighty morphin ranger.

The Knasty Knight was a monster created by Rita Repulsa using an evil spell, not using the usual Monster-Matic. Finster cinch on using the Knasty Knight for their plan to validate Tarmac 3. Squatt and Baboo helped forge the sword for Finster by welding Knasty Knight's sword that same night to summon the monster. Using this spell from Finster's Spell Book.

Zack is then ambushed by the Knight as he goes for a walk. His power was the ability to reflect the energy attacks back at them, usually returning the energy through the Power Weapons damaging them in the process. He could also project blasts of red energy beams from his sword.

The Dino Megazord defeated the Knasty Knight by using his own strategy against him, reflecting his energy beam off the Megazord's Power Sword.

He is the Monster who was reported to have stolen the Sword of Darkness from Zordon's forces 10,000 years ago to be used to give more control over Rita's Evil Green Ranger. The sword itself became a major part of Evil Green Ranger's Powers. 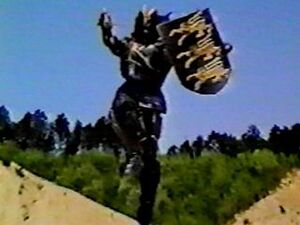 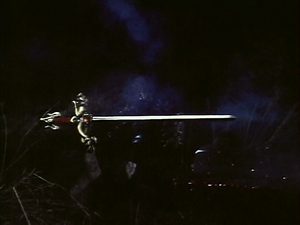 Retrieved from "https://villains.fandom.com/wiki/Knasty_Knight?oldid=3493358"
Community content is available under CC-BY-SA unless otherwise noted.