Royal advisor and servant to the Red Queen

Serving the Red Queen while also making her do what he wants.

Beheading anyone who opposes him or the Red Queen.

Aid the Red Queen in maintaining her complete control over Underland (failed).

Ilosovic Stayne, better known as The Knave of Hearts, is the secondary antagonist of the 2010 dark fantasy film Alice In Wonderland and a posthumous character in its 2016 sequel Alice Through the Looking Glass.

He is the right-hand of the Red Queen. Although feigning loyalty to her, however, the Knave is actually even more malevolent than the mad tyrant and plays upon her insecurities in order to skillfully manipulate her into doing what he wants. He is taken from the traditional English nursery rhyme, The Queen of Hearts, and is based on the Jack of Hearts playing card as well as the late Niccolò Machiavelli.

He was portrayed by Crispin Glover, who also played Grendel in Beowulf, Willy Wonka in Epic Movie, Fifi in Open Season, Stan Bittleman in Like Mike, and Thin Man in Charlie's Angels.

The Knave of Hearts is first seen obtaining the Oraculum and taking it to the Red Queen as he shows her Alice slaying the Jabberwocky. Soon after, Stayne is briefly seen talking Bayard the Bloodhound, getting him to believe that if he found Alice for him, he would let his wife and pups go free, a deal he had no intention of upholding.

Stayne is next seen talking to The Mad Hatter, The March Hare and the Dormouse, unaware that the Hatter is hiding Alice in a teapot. As the Hatter attempts a random distraction, Stayne threatens that if they were hiding Alice, they'd lose their heads as he chokes the Hatter, who then remarks that they'd 'already lost them'. He releases the Hatter and then leaves as Bayard runs off, pretending to have found Alice's scent.

Later on in the film, Stayne is seen in the hallway of The Red Queen's castle, telling Alice, who was posing as another person named Um, that he likes her, but Alice immediately turns away from him. One of The Red Queen's subjects overhears this and tells the Queen. She gets infuriated with Stayne and, when he convinces her that Alice was the one obsessed with him, she screams 'off with her head'. Stayne is then seen attempting to take the Vorpal Sword away from Alice, but is interrupted by the Bandersnatch (who had become friends with Alice after she returned its missing eye). Further into the film, during the final battle, Stayne duels The Mad Hatter and would've been killed by him if Alice hadn't slayed the Jabberwocky and stopped the battle. After The White Queen declares to banish both Stayne and The Red Queen, Stayne attempts to kill The Red Queen, much to her shock due to her genuine feelings for him, but fails due to The Mad Hatter's interference.

He is then banished from Underland and sentenced to the Outlands for eternity with The Red Queen, pleading for death at the White Queen's hands rather than a life with the Red Queen, who is now infuriated at him for his treason. He is denied the mercy of death, for the White Queen owes him no kindness.

Alice Through the Looking Glass

The Knave's skeleton appears in the sequel Alice Through the Looking Glass. Time was sitting on a chair next to him and saw his skeleton, with a blade embedded in his chest, and wondered what happened to him, either the Queen killed him for trying to kill her or she hired one of her men to kill him for the very same reason. His head later falls off at one point.

In the anime and manga series Pandora Hearts he is re-imagined as Jack Vessalius, the instigator of the tragedy of Siberia all for in his love for Lacie.

In the Tim Burton's Alice in Wonderland game for Nintendo DS, he is the boss of Chapters II and III. Using any of the characters, the player must roll behind Stayne and hit him in the back to slowly deplete his health. In Chapter II he attacks the player near the Mad Hatter's tea party. His most powerful move is where he spins around like a tornado - the player can dodge this continuously using the roll until he falls dizzy and can be hit a large number of times. After his defeat, Stayne flees.

When he reappears in Chapter III at the Red Queen's castle bridge, Stayne must be defeated using a similar pattern except he now has more health. He also now has another move where he pulls out a spiky sphere and rolls it towards the player. As the ball rolls, Stayne will quickly regenerate health, and if it hits the player it will almost entirely deplete his/her health. However, the player can use the White Rabbit to reverse time over the sphere and send it back towards Stayne; this will cause him to run but fall and lose a fairly large amount of health. After his second defeat, Stayne falls unconscious and drops a piece of Underland which allows the player to venture deeper into the castle. 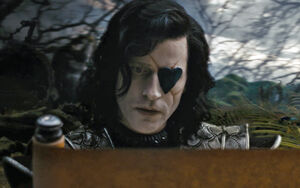 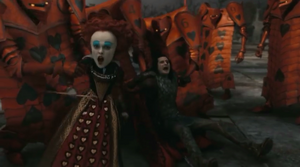 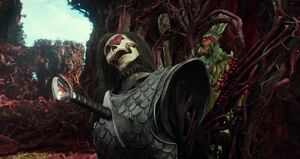 Stayne's corpse in Alice Through the Looking Glass.