Nicholas Grossman, also known as Knickknack, is a minor villain in the Marvel Comics universe.

Nick Grossman was the fourth recruit of the Death-Throws, a group of costumed mercenaries and jugglers gathered and led by the Ringleader. The other two members were brothers Oddball and Tenpin. Although the Death-Throws valued teamwork more than other villain groups, Oddball suddenly broke up with the Death-Throws for unknown reasons. Tenpin found him after a while, and took him back to the Death-Throws. While solo, Oddball had began to work with another criminal juggler, Bombshell, and had convinced her to join the Death-Throws. 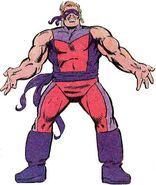 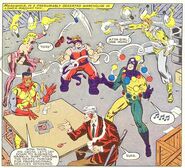 Add a photo to this gallery
Retrieved from "https://villains.fandom.com/wiki/Knickknack?oldid=3618052"
Community content is available under CC-BY-SA unless otherwise noted.