Destroy Gipsy Danger.
Kill Yancy Becket (both succedded).Murder Raleigh Becket.
Wipe out all life on Earth by setting the Ring of Fire (both failed).

However, Pan Pacific Defense Corps quickly discovers that the immense beast has merely temporaly stopped its pulse to play dead. Just then, Knifehead suddently jumps out water and attempts to brutally bite Gipsy Danger's head off only to be barely stopped by robot's arms. When Jaeger tries to use plasma cannon again, monstrosity pulls the arm aside and shoves its blade-shaped head into Jaeger's shoulder, severing its limb.

Knifehead, like all kaiju in the franchise, is extremely hostile, animmalistic and aggressive creature by its nature. At the same time however, Knifehead has displayed a limited level of intelligence allowing it to plan primitive traps such as playing dead, as well as ability to learn and avoid attacks that can harm it. Still, creature prefers to rely on its berserker rage and barbarian tendencies in combat than using the actual strategy, such as ripping apart Jaeger with its jaws. This has ultimately been its grave mistake, as Knifehead accidentally bitten down actively charging plasma cannon which fired a shot that killed it.

Standing at 315 ft (96 m) tall and weighting 8,700 metric tons, Knifehead is massive bipedal semi-humanoid monster with shark-like features, large blade-shaped head that rests at the end of broad neck, set of long arms, smaller pair of limbs on its chest, short tail, and turtle-like outer shell, which moves in vertical position on two small hind limbs. Its entire body is leathery dark-grey skin with golden-orange veins spread across torso, arms and neck. Knifehead's arms have exposed ulna and radial bones much like Trespasser, Scunner and Slattern. Enlarged hands at the end of its arms possess three fingers with black curved claws.

Aside from signature knife-shaped nose, Knifehead's facial structure includes powerfully-built set of jaws filled with sharp teeth, blowhole which expels air upon surfacing, two sets of small bioluminescent-blue eyes on each side, exaggerated chin, and bioluminescent-blue interior of mouth. Whenever the kaiju is shown to be injured, its blood resembles dense bright-blue mold. 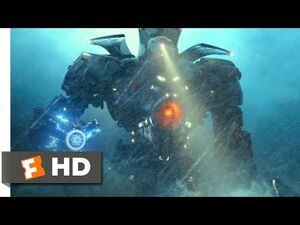