Royal Guard (some of them;formerly)

Fallen Knight
The Knight Aberrant (あくまのきし, Demon Knight in Japanese) is a recurring monster from Dragon Quest series. It is a Knight in grey armor armed with lavender gauntlets, boots, and mohawk. It has ditched Fizzle for Snooze, making it much more dangerous to confront.

In appearance, the knight wearing heavy, bulky armour and equipped with an axe and usually a shield, the knight aberrant is as impressive a physical force as its appearance lets on. In the original NES version of Dragon Quest, it was armed only with an axe and faced to the right, likely to differentiate it some from related monsters.

Because now it is merely a soul trapped inside an armour, Knight Aberrants are still very loyal to their master, but also show their brutaltality, examples like in the original NES game and its remakes, where it casts Snooze, making the player fall asleep and tackling enemies from the tenth game onwards, which could cause them to miss their turn.  These actions already violate the chivalric code of protecting the weak.

The knight aberrant appears as an optional boss in the ruined town of Damdara. Fighting it is not necessary to beat the game, it certainly makes doing so easier since Erdrick's Armor can be found nearby. However, more show up as normal enemies in the Dragonlord's castle.

Returning after a long absence, they are more stronger than in the first Dragon Quest, being able to Tackle enemies and summon Curslimes, all while still sending them to sleep with Snooze, and increasing their own attack with Oomph.

Knight Aberrants return as normal enemies and a minor boss in one of the Tockle missiosn "Ghost of a Golden Age", where it were sent by the End of Time to test the Luminary by having the Knight Abberant enslave every citizen's soul in the destroyed town of Damdara to work endlessly. One of them asks the Luminary and his party to help, where they agree to defeat it. After finding it on the swanp, the knight immediately battles the heroes, only ended up being slain, freeing the citizens's souls once for all. 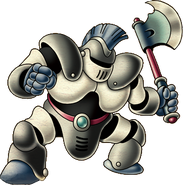