Agility
Brute strength
Abyss magic
Buffing himself with the dark.

Spreading the Abyss.
Killing everyone that stands in his way.

Knight Artorias, also known as Artorias the Abysswalker, is the titular central antagonist of the Artorias of the Abyss DLC for the 2011 action roleplaying game Dark Souls and a posthumous character of Dark Souls III. Originally a powerful knight who attempted to free Oolacile from the possession of Manus, he was corrupted by the Abyss he was destined to destroy and has become nothing more than those that he had ever fought: a feral monster.

He was voiced by Freddie A'Brassard.

Artorias was once one of the Four Knights of Lord Gwyn alongside Dragonslayer Ornstein, Hawkeye Gough, and Lord's Blade Ciaran. Known for his unbreakable will of steel and admiration for greatswords, Artorias was trained to combat the Abyss that leaked from underneath the kingdom of Lordran. Accompanied by his wolf companion Sif, Artorias fought the Darkwraiths of New Londo who had since fallen from grace to the Abyss. For his noble actions, he was awarded a Silver Pendant that deflects the dark spells from the Abyss. Supposedly, within the ruins of New Londo, Artorias established a covenant with beasts that were not yet corrupted and was granted a special ring that allowed him to enter the Abyss itself without being consumed, thus giving him the alias "Artorias the Abysswalker".

Artorias would then hear of Oolacile, a place corrupted by the direct source of the Abyss itself, a sorcerer by the name of Manus. While Ornstein stayed behind to guard Anor Londo with Executioner Smough, Artorias, Ciaran, and Gough ventured to Oolacile. While the other knights fought against the infected citizens of Oolacile and Gough attempted to settle his score with the Black Dragon Kalameet, Artorias and Sif entered the Abyss to engage Manus and rescue Princess Dusk.

However, when Artorias entered the Abyss to confront Manus, he was completely overwhelmed by the darkness. Deeply marked by the Abyss with his arm broken, Artorias had no choice but to abandon his shield so as to protect Sif in a magic barrier and was corrupted by the dark. He later emerged from the Abyss, not as his regular self, but rather an alteration deprived of spreading the Abyss.

Despite being corrupted by the Abyss and being killed by the Chosen Undead, rumors instead told of Artorias honorably dying fighting against the Abyss. As such, he was seen as a hero through all of Lordran. His corpse was buried in the Darkroot Garden, guarded by the Forest Hunter covenant and Sif, watching over his master's grave. Defeating Sif makes him drop the Covenant of Artorias ring that is mandatory to enter the Abyss to fight the Four Kings.

His legacy also carried over to the kingdom of Lothric, where the Abyss Watchers partook the wolf blood and bound their souls to the "wolf blood master". The legion took after Artorias' inspiration to fight off any sources of the Abyss. For their actions, they were bound to the First Flame as Lords of Cinder. However, in a tragic twist of irony, they also became corrupted from the Abyss much like their posthumous idol.

Artorias is a tall figure wearing silver armor decorated with blue cloth. His face is hidden behind a hood. Since becoming corrupted by the Abyss, Artorias has a shadowy aura emitting from his body. He leaves puddles of a black liquid where he walks.

Once known as one of the most loyal, caring, and trustworthy knights of Gwyn, Artorias has since become insane from exposure to the Abyss. He expresses the loss of his sanity before the boss fight by mercilessly killing a Bloated citizen, throwing its corpse at the Chosen Undead, and howls like a madman during the fight before some of his attacks. 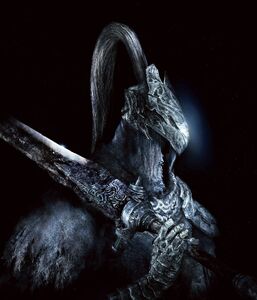 Artorias in promotion artwork for Artorias of the Abyss. 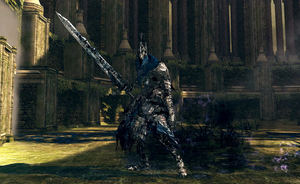 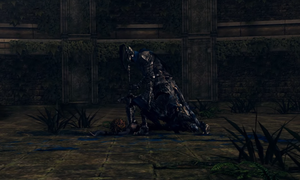 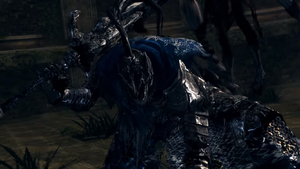 Artorias about to throw the Bloated citizen at the Chosen Undead. 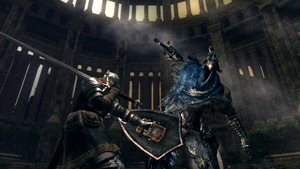 Artorias against the Chosen Undead. 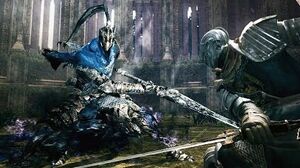 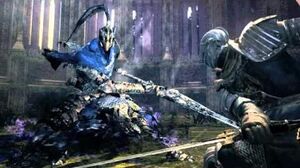 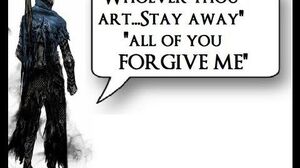 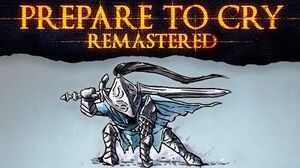 Prepare to Cry Remastered ► The Legend of Artorias the Abysswalker