Expressing his devout to Fina.

Kill Anastacia and steal her Fire Keeper soul (succeeds or fails based on player's decision).

Knight Lautrec of Carim is a supporting antagonist in the game Dark Souls. He is a knight from Carim with a devout for the Goddess Fina. In actuality, he is a psychopath obsessed with obtaining power, manipulating and ridding those who stand in his way.

He was voiced by Daniel Roberts and Will Vanderpyre.

Lautrec can be first encountered in the Undead Parish, at the top floor of the church locked in a cell. He requests that the player lets him out so that he can "get back to work". The cell can be opened with either the Master Key or the Mystery Key found earlier in the Undead Parish in the underground room behind the main gate with the Fang Boar guarding it.

Upon being freed, or escaping once the Bell Gargoyles are defeated and the first Bell of Awakening has been rung, Lautrec makes his way to Firelink Shrine, sitting down across from Anastacia of Astora. If he was freed, Lautrec rewards the player with a Sunlight Medal. If he was freed, he can be summoned as a White Phantom to help the player fight the Bell Gargoyles and the Gaping Dragon.

However, regardless if Lautrec was freed or not, upon ringing both Bells of Awakening or collecting the Fire Keeper Soul in Blighttown, Lautrec kills Anastacia and steals her soul. This stuffs out the bonfire at Firelink Shrine, preventing the player from ever resting there until they retrieve Anastacia's soul. From Anastacia's corpse, the player can obtain her robes and a Black Eye Orb, an item that allows the player to invade the world of the Fire Keeper's murderer.

Where Lautrec ran off to was Anor Londo. Once the player enters the main hall of the cathedral in front of the room with Dragonslayer Ornstein and Executioner Smough, they feel a quiver come from the Black Eye Orb. Should it be used, they are warped to Lautrec's world, where he summons a sorcerer and a Pike-wielding warrior to aid him in killing the player. It is wise to take out the two summons first before dealing with Lautrec. Once Lautrec is defeated, he drops the Fire Keeper soul, which can be used to revive Anastacia and the Firelink Shrine bonfire, or it can be used to gain five Humanity or be given to another Fire Keeper to upgrade their Estus Flasks. If Lautrec was killed through invasion, his hollow corpse can be found to the right of the Chamber of the Princess bonfire. It can be looted to obtain his armor set.

Even before revealing his true colors, Lautrec appears as a cunning person who only acts polite to get what he wants. After killing Anastacia, he sadistically mocks the player for failing to stop him. However, he does have some standards, such as advising the player to stay away from Trusty Patches and revealing Petrus's true plan to get rid of Reah. 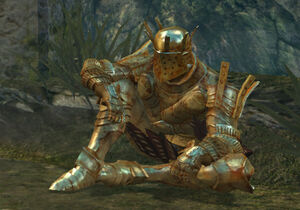 Lautrec with his summoned guards.