Knight of the Living Dead

Knight of the Living Dead
Knight in Armor
Armor

The Knight of the Living Dead (unofficial), also known as the Knight in Armor or simply The Knight, was a minor character in the Disneyland version of the popular attraction The Haunted Mansion.

In 1985, the Knight of the Living Dead was introduced into the mansion as an experimental scare tactic. Disney was worried that the Haunted Mansion had become too predictable, and that introducing a random jumpscare element may restore interest and tension within the attraction. The Knight was added and was portrayed by a live actor, who would creep up to Doombuggies and scare the people in the vehicle before moving on.

However, the addition of the Knight came with an assortment of problems; for one, many complained that it ruined the creativity and effect of the ride by being a cheap jumpscare. There were also many reported instances of Knights catching guests performing acts of vandalism, drug use, or even sexual relations in their vehicles. Knights were also involuntarily attacked due to their sudden scares, resulting in them being punched, kicked, and having things thrown at them. Because of this, Knights were given emergency ride shut-off remotes that would allow them to temporarily suspend the ride's progress to allow them to remove troublesome guests or retrieve thrown items.

Because of the issues as well as budget constraints, the Knight character was removed from the attraction that same year, resulting in it being one of the shortest-lived additions to a Disney attraction.

The Knight's actual story and history is mostly shrouded in mystery. It is even unknown if the character is a ghost, a possessed suit of armor, or a living knight (this is unlikely).

However, it is most reasonable to assume that the Knight is one of the 999 ghosts in the mansion, and is most likely that the ghost of a medieval knight slain in battle. After death, the Knight's ghost made its way to the mansion, where it continued its violent and brutish ways by attacking guests and being a general menace within the mansion.

Though there is no confirmed explanation as to the Knight's disappearance, it is likely that its barbaric and violent ways resulted in the other ghosts expelling it from the mansion or it somehow being permanently destroyed. 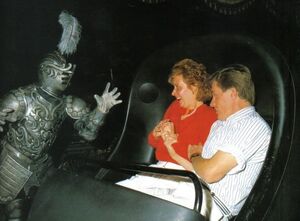 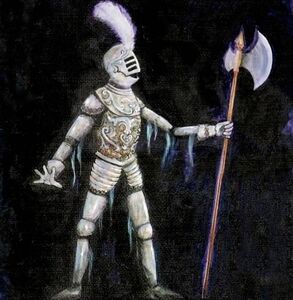 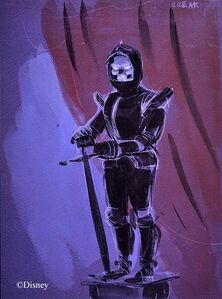