Unknown, but speculated to be Prince Phobos' defeat and his loss of royal Meridiannite rulership

Each members possess their own unique dark supernatural abilities

Restore Prince Phobos to the throne and destroy Queen Elyon.

Vengeful Dark Knights
The Knights of Vengeance are a group of vengeful evildoers who worked for Phobos and Nerissa and minor villains in the animated TV adaptation of W.I.T.C.H.

A group of warriors who were originally servants/fighters for Prince Phobos during his reign. They appeared individually in Season One, but after Phobos' defeat Nerissa gathered them into her henchmen, the Knights of Vengeance. Their objective was to restore Phobos to the throne and destroy Elyon, the Guardians and the Rebels. They were the primary antagonists for the first half for Season 2, where, with the help of Nerissa, they planned numerous attacks on Meridian and the Guardians. After Phobos's breakout and attack on the palace in "J is for Jewel", Elyon locked them up in their cells along with Phobos.

They came back at the end of Season Two, when Phobos was released by the Guardians to help them get the Seal of Nerissa, but betrayed them and instead used the Seal for another attack on the palace, in which the Knights of Vengeance assisted. Phobos, Miranda, Frost and Crimson were locked up again. Raythor, Sandpit and Gargoyle switched allegiances and helped protect the Palace. The Tracker was killed and Sniffer probably locked up again. 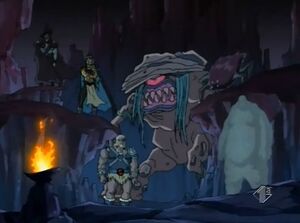 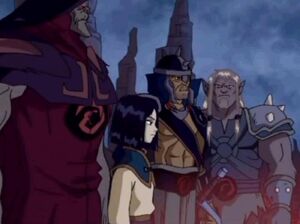 The Knights of Vengeance 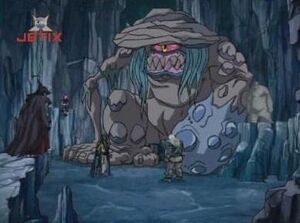 Add a photo to this gallery
Retrieved from "https://villains.fandom.com/wiki/Knights_of_Vengeance?oldid=3528562"
Community content is available under CC-BY-SA unless otherwise noted.