Star Wars: The Old Republic: Knights of the Fallen Empire

Powerful command of the Force

Protect and defend the Eternal Empire

Fanatical Dark Knights
The Knights of Zakuul, also known as the Zakuul Knights, are one of the common antagonists in Star Wars: The Old Republic: Knights of the Fallen Empire and Knights of the Eternal Throne. They were an order of Force-sensitive warriors and knights who served Valkorion, the Immortal Emperor of the Eternal Empire. They're different than the Jedi and the Sith in that they seek to only use the Force as a means of enforcing justice across the Empire.

As a group of Force-sensitive warriors and a religious order, the Knights of Zakuul believe that the Force should only be used as a means of enforcing the law and justice. Unlike the Jedi or the Sith, the Zakuul Knights don't fit into a particular category or moral alignment when it comes to the usage of the Force and stand in a similiar positon as Grey Jedi or Dark Jedi do. The Knights of Zakuul are loyal to the Eternal Empire above all else and uphold the law on behalf of Valkorion and the Eternal Throne, which they're also loyal to as well. The Knights also seek to spread their teachings to everyone else rather than hold them for themselves like the Sith.

The Knights of Zakuul have various different rankings and sects within the order. These ranged from Exarchs to cyborg knights that were both commonly founded on a Star Fortress. Different sects of the order would also wear different colored armor to distinguish themselves from the rest  with the variations being gold, silver, white and black.

The Exarchs were an elite branch of the Zakuul Knights who were the cyborg knights of the order. They recieved both biological and cybernetic implants and upgrades or implants and were stationed at Star Fortresses to act as overseers for the stations. They acted as both military governors and religious leaders of the various planets that were conquered by the Eternal Empire and were known to have worn upgraded and enhanced versions of the Zakuul Knight armor. Exarchs also wielded Lightsaber pikes which varried in color along with a blaster bolt deflector shield. The primary weapon was a lightsaber pike that was eighter blue, purple, red, orange, or yellow and they were known for their strong connection to the Force. They were capable of charging themselves with solar energy and redirecting it towards a target and they could create hallucinations to use against enemy combatants to weaken their resolve.

During the reign of Valkorion as the Immortal Emperor of the Eternal Empire, there was a continget of Knights that personally served him known as the Honor Guard. Honor Guards were seen stationed in both the Eternal Throne room and the hallway leading to the room itself and they acted as the personall bodyguards and protectors for the Immortal Emperor. After the demise of Emperor Valkorion, it's unknown that happened to the Honor Guard after Emperor Arcann assumed the throne and the Empire as well. Members of the Honor Guard carried blue colored lightsaber pikes with blaster bold deflector shields and wore standard Zakuul Knight combat armor. 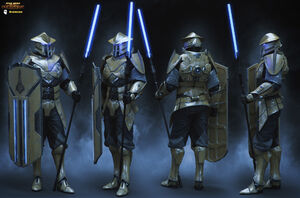 Concept art of the Zakuul Knights 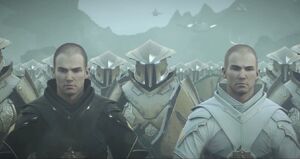 Zakuul Knights during the Eternal Empire's war of conquest 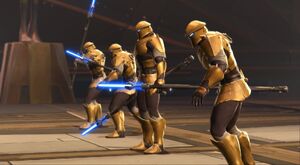