Killing humans he sees as an oppressive people, hates having tests conducted on him.

Kill Steven Jacobs (accomplished), overthrow Caesar in order to take control of the apes against the human race, kill off the human race.

Koba was a test subject for Gen-Sys during the development of the ALZ-113 drug and as a result was subjected to torture for many years. Besides from that, little is known about Koba's past. During that time he developed a hatred for humans, mostly towards Steven Jacobs.

After exposure to the ALZ-113 drug, his intelligence was surprisingly increased to the point where he was able to write Jacobs' name, but Jacobs was too overjoyed with the apparent success of the virus to notice Koba's vicious intentions towards him. During one of these tests, he attacked Franklin, knocking off his mask and exposing him to the ALZ-113. It was soon proven in the days to come that while the virus improved the intelligence of the apes, it was deadly to humans. The virus was accidentally released into the human population, killing off most of the world's population as the pandemic reached global proportions.

Battle at the Golden Gate Bridge

Koba was soon freed by Caesar and joined the rebellion to find haven in Muir Woods Park and was ordered by Caesar to climb the bridges high wire supports. During the battle Buck, a comrade and friend of Caesar's was killed by Jacobs, who was now dangling from the wreckage of a helicopter over the water. Not willing to kill him but also not caring for him, Caesar left Jacobs in the hands of Koba. He begged for mercy, but Koba pushed Jacobs off the bridge without hesitation.

He was later seen in Muir Woods Park, where Will had come to get Caesar. Koba attacked him but was stopped by Caesar. Koba then ran off. However, he rejoins the apes in acknowledging Caesar's leadership.

Dawn of the Planet of the Apes

After the Simian Flu disease

10 years after the outbreak of the ALZ-113 virus a.k.a the Simian Flu, Koba is now living with Caesar in the ape colony, where he acts as an advisor to Caesar and a mentor to his young son, Blue Eyes. Caesar seems to have forgiven Koba for his attempted attack on Will and the two act as friends. During an elk hunt, Koba saves Caesar and Blue Eyes from a grizzly bear for which Caesar expresses his gratitude to Koba.

When a group of humans stumble upon the ape colony, one of them, Carver, shoots a young ape named Ash, Blue Eye's best friend and wounds him. Caesar and Koba and the other apes rush to their aid and force the humans out. The following night, the ape council decides on how they should deal with the humans. Koba strongly suggests they attack the humans before they can attack themselves, to which many of the apes, including Blue Eyes, agree. Caesar disagrees, feeling war will do more harm than good, conducts a diplomatic plan to deal with the human threat. The following morning, an entire ape army appears and forces the humans to stay in their land, while the apes stay in theirs.

This does not last, for a group of humans led by Malcolm return to talk the following day. Malcolm says that the hydroelectric dam, which is located in the ape territory, is the only chance the humans have at regaining power. Caesar allows them in, which angers Koba greatly. This causes an argument, to which Koba reminds Caesar of the mistreatment he suffered at the hands of humanity. Seeing that he offended his leader, Koba asks Caesar for forgiveness, which he accepts. Nonetheless, Koba is still not convinced of the humans' real plans, and begins to doubt his leader's loyalty.

He and his two followers sneak into the human city and discover a vast array of weaponry, which he believes will be used for an attack. Though Koba is caught, he is able to escape with his life by pretending to act like a circus monkey to two guards. Returning to the ape colony to warn Caesar, Koba is dismayed when he learns that the humans are still there. Koba in turn attacks Malcolm's teenage son, Alexander, but is stopped by Malcolm and Maurice. Outraged, Koba accuses Caesar of loving humans more than the apes and his sons, which angers Caesar and stirs a fight between Koba and him which ends with Koba, with a bloodied face, on the ground. Caesar stops and reminds himself the one most important rule in the colony, Ape not kill ape. Koba again asks for forgiveness and again Caesar accepts. Though now, Koba puts into motion his plans.

After talking with Blue Eyes on his father's feelings towards humans, Koba returns to the armory. He performs the circus act again and steals one of the guard's rifles while they were distracted and kills them with it. With the weapon in hand, Koba sneaks into the ape colony, and kills Carver by beating him, taking his lighter and hat. As the apes celebrate, Caesar is accompanied by his family, Koba sneaks up to Caesar and the two stare at each other as Koba shoots Caesar and he seemingly falls to his death. Koba uses this to gain leadership of the colony and convince the other apes to turn against the humans and rallies as they prepare to attack the city.

The attack begins by the apes storming the armory and taking as many guns as they can and move onto the city. Though many apes are killed in the ensuring battle, the ape forces successfully take control of the human city, though the human leader, Dreyfus, escapes. Koba soon proves to be a ruthless and cruel leader to humans and apes alike. This is shown when he kills Ash in front of everyone by throwing him off a balcony for refusing to kill a man as it wouldn't have been what Caesar wanted. He furthers his cruelty by forcing all the captured humans into cages and imprisoned other apes, including Caesar's other advisors and his former friends Maurice and Rocket, due to them being too loyal to Caesar.

Yet unbeknownst to Koba, Caesar is still alive, and was found by Malcolm and his family and healed back to health. When Malcolm goes to their former home to find medicine, he is discovered by Blue Eyes who turns on Koba and brought to his father. The father and son recoil and realize they must put an end to Koba's tyranny. Blue Eyes frees the humans and apes taken prisoner by Koba and learns that Koba has sent for the women and children, including Caesar's wife and infant son. Fearing his entire family may be at risk, Caesar knows he must act.

Showdown between Caesar and Koba

Caesar, his loyal followers, and Malcolm head to the city. Malcolm leads the apes into the city and is rejoined with Dreyfus and few other surviving humans. Malcolm learns that Dreyfus has rigged the tower where the apes are based with C-4 explosives. Malcolm holds the men at gun point as Caesar confronts Koba. At the tower, Koba is quick to insult Caesar's leadership, but Caesar remains unhinged. Koba points a gun at Caesar, but drops it and attacks Caesar. Caesar uses Koba's hatred of humans and their torture of him against him and is able to wound Koba in his lower thigh. During the fight, Dreyfus detonates the C-4, which kills him and his two accomplices, but Malcolm somehow survives. The tower collapses and many of the apes are left in the rubble.

While Caesar and Blue Eyes helped the wounded apes, Koba finds a gun, leaving behind an ape under the rubble to get it no less, and shoots at Caesar and the other apes, injuring Maurice in the process. Though when Koba gets distracted, Caesar jumps and pushes Koba over the edge of the tower. Koba now dangling from the edge is approached by Caesar who grabs his hand. Though Caesar lifts Koba up, Koba reminds him of the colony law, Ape not kill ape. Caesar replies that due to his betrayal and crimes, Koba is no longer an ape and lets him fall to his death.

Caesar regains control of the ape colony and he is reunited with his family. However, Koba's damage proved too great, and Caesar sees the inevitable war coming.

Koba was a ruthless, sadistic, vicious, ill-tempered, and deceitful ape with little to no mercy and respect for life and others well being. He was also shown signs of cunning and great intelligence, due to the affects of the ALZ-113 virus, as he plots to fool the apes into believing humans killed Caesar. When in power, Koba was a down-right tyrant, killing and imprisoning even his own kind just to show dominance.

Although, before turning on Caesar and revealing himself as the main antagonist, Koba showed redeemable qualities such as compassion, caring, and respect towards his fellow apes such as Caesar and Blue Eyes. Then, he acted as a friend to Caesar and a mentor to Blue Eyes, to a point when he was willing to put himself in harms way for them. An example being when he stabbed a bear to save them. Though Koba's sheer hatred for humans proved too great, and whatever feelings of friendship and loyalty he had, died when he shot Caesar.

Koba in Rise of the Planet of the Apes

Koba in Dawn of the Planet of the Apes

Koba with Caesar and Malcolm 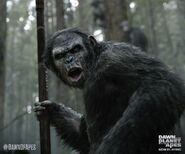 Koba's second attempt of an assault on the humans
Add a photo to this gallery
Retrieved from "https://villains.fandom.com/wiki/Koba?oldid=904270"
Community content is available under CC-BY-SA unless otherwise noted.