Fight to settle their differences

Torturing and killing other races

Conquer lands as much and as far as they can grab.

Kobolds are a race of small reptilian humanoids from Dungeons & Dragons and Forgotten Realms.

They are aggressive, deceptive but industrious and creative. Due to their small size and low strength, they are skilled in setting traps and ambushes. A Kobold stands between 2 and 3 feet tall.

Kobolds hold a hatred for the other humanoid races, especially Gnomes, Pixies and Sprites, as well as individuals who are taller than them, and they enjoy capturing and torturing them (they do poke fun at Kobolds so others do share blame for their own plight). Although they would show respect and obedience towards other races if required, they always looked for ways to display their resentment. Kobolds resent their own short statures and most Kobolds feel they ought to compensate for their small size in other ways, such as industrious tendencies, trap making, crafting and/or aggression.

Kobolds have also the tendency of serving evil aligned dragons. A Kobold tribe would present a dragon with various tributes and sacrifices and whatever they think the dragon may like; they even see it a great honor to be devoured by the dragon. If a Kobold tribe was not accepted by a dragon, no matter: Kobolds would start working for the dragon's affection in secret. Once a Kobold tribe settles to serve a dragon, their entire existence will be to serve their perceived god in every way from that point on.

They live in tribes inside underground caves or thick forests. Despite their mischievous nature, Kobolds are very respectful of the rules of their tribes and draconic masters, making them Lawful Evil. Kobolds live in dark places (having darkvision their visions are very sensitive to light) and live by forming tribal societies. Their lairs are often bunched up and overcrowded, so often when one tribe becomes too numerous, it splits into numerous smaller factions. The overcrowding had long eliminated any concept of privacy, so kobolds sleep in communal areas where nudity is not regarded as shameful or offensive; even to the opposite sex. This common overcrowding often leads to conflict, although these fights are not usually lethal. Over time, the communal lifestyle of Kobolds lead to a lack of deep-rooted divisions or grievances.

Kobolds share plans to members of the entire tribe. General plans and goals would be common knowledge to all members, and detailed plans are passed from one member to the next with all who ask to be allowed to work productively for the good of the tribe. Kobolds do value their own lives, but their tribe comes first. They consider the success of their tribe to be their own success.

Kobolds are omnivores, eating both plants and animals alike. They would not refuse to eat intelligent creatures if and when the opportunity presents itself. Kobolds are willing to eat just about anything when the situation regarding foods becomes desperate. Due to their cold-blooded nature, Kobolds that had spent time in a warm place would not need to eat for days. But because Kobolds are cold-blooded they are susceptible to cold, especially if it was brought on quickly.

Kobolds are reptilian. And just like other reptiles, Kobolds shed their skin periodically. Number of shedding skins may vary depending on maturity level of Kobolds: a growing Kobold might do this as frequently as weekly, but a fully matured Kobold usually shed once per season. Unlike common reptiles, Kobolds do not shed their entire skins at once; they instead shed portions of their skins over a period of time. 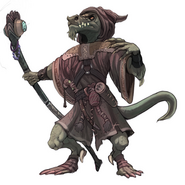 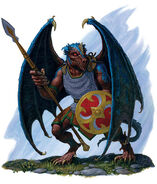 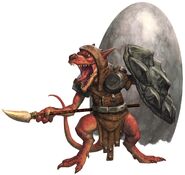 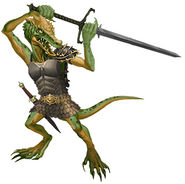