Member of the Black Dragon clan

Gain the god-like powers of Blaze to become a god.
Betray Kira and steal Blaze's power from her.

Kobra is one of Kabal's new Black Dragon Clan recruits and a villain from the Mortal Kombat series of fighting games. He also has romantic feelings for his partner Kira, despite her willingness to kill him (something he does not seem to mind).

Years before the story, Kobra had once been at the top of his New York City Karate School class in training. In the back alleys, he used his skills to maim street gangs, gangbangers and drug pushers. In his bloodlust, Kobra murdered many of his opponents and also committed a string of robberies until the NYPD arrested him. On his way to jail, Kobra had no recollection of how many he had killed. Just then, the cops who had arrested him were killed by the Black Dragons Kabal and Kira and rescued the murderous martial artist from incarceration, before recruiting Kobra into the New Black Dragon criminal organization.

Although Kobra is never seen in Mortal Kombat X or the new timeline. He is mentioned at the beginning of one of Erron Black's fights with Kano. Erron Black tells Kano that he has killed a Black Dragon Erron Black says that he thinks it was Kobra which upsets Kano. The leader of the Black Dragon Clan Kano tells Erron Black that he will gut him for killing Kobra. It is unknown when Erron Black or how encountered Kobra and killed him the only thing that is known is that Erron Black comfrims that he killed Kobra.

Kobra is a skilled martial artist and is able to charge his attacks with fire, as well as use blasts of it. He can also teleport in a trail of smoke and strike his opponent. 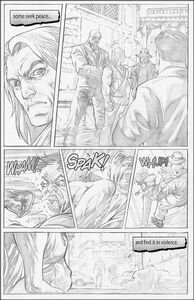