Kogasa Tatara is a minor villainess from Touhou Project that made her first appearance in Undefined Fantastic Object. She's a kasa-obake, or umbrella youkai who likes to frighten people and is set on scaring the heroine, even if she has to do it by means of danmaku. During the events of Ten Desires she appears at the Myouren Temple Cemetery to try to manage a scare again, but also to ask the heroine to take care of the jiang-shi who is guarding the Great Mausoleum.

Kogasa attacks by twirling and sending spiraling bullets all across the place. She seems to become more powerful at night, being able to invoke rain and strong gusts. The karakasa is also able to shoot beams.

She has turquoise hair, one turquoise eye and one red eye (Heterochromia). Wears a blue-green vest with white sleeves and a light blue skirt. Uses a purple umbrella with an eye and a tongue protruding out of it.

As stated in ZUN's Undefined Fantastic Object music comments, Kogasa is a cheery happy youkai, but gets easily depressed when things don't go her way (which is very often), typically when she fails to surprise someone despite her best efforts. She stated she wishes for vengeance on humans for being discarded in Undefined Fantastic Object. However, she's actually quite friendly to humans and her vengeance doesn't go beyond surprising and spooking humans. She gets genuinely pleased when she successfully surprises someone (or thinks she successfully surprised someone).

She despises not being taken seriously. She often attacks the protagonist in Undefined Fantastic Object in a fit of despair when she thinks they're making fun of her. She's displeased with children liking her eccentric design.

Kogasa suffers from self-esteem problems, as she is easily pushed into lamenting about wondering what her purpose is, or that she might be better off if she just went back to being an umbrella. Perhaps due to this, Kogasa is seeking a true purpose of existance for youkai, tsukumogamis, and herself. She attempted this by starting a career in babysitting (which did not seem to go very well), surprising people (which also isn't going very well, though she's found some success in the Myouren Temple graveyard), and was even considering going back to being an umbrella just so she can be useful in that regard. She's stated to Aya Shameimaru in an interview that she's trying to imagine what humans want, and then plans on becoming that something they can use. Deep down, it appears this pitiable illegally dumped object and troubled forgotten item just wants to be desired.

Her depression may also be another attempt at getting attention. She can get so depressed upon failing to surprise someone that it can become "a bother". Reimu Hakurei notes in Undefined Fantastic Object that Kogasa seems to have lost the battle on purpose, to which Kogasa agrees. Kogasa comments that it might be sadism, although Reimu suspects it's something else. That Kogasa ironically treats umbrellas like garbage by throwing them in certain spell cards leads Hatate Himekaidou to wonder if she wants to be treated like garbage, herself.

Unlike other youkai, Kogasa doesn't eat humans. Instead, she eats their spirit. In her own words, if she doesn't surprise someone, she'll go hungry. In the past, humans apparently feared youkai enough that she'd get a huge portion of their spirit on a successful surprise, as according to Kogasa in Undefined Fantastic Object, even a slight surprise would make a human have difficulty walking straight. This is apparently no longer the case in the present day.

This stated ability does not appear to be an actual ability beyond what anyone could do. Kogasa's observed attempts to surprise anyone hasn't really consisted of much more than her screaming "Boo!" or simply attacking someone if pressed. Hatate Himekaidou notes that she hides in the darkness to attempt to surprise people, but her hiding places are obvious. Hieda no Akyuu describes her attempts as child's play, to the point where the greater "threat" from her is how bothersome it can be to deal with her after she gets depressed by her failure to surprise someone. It's sometimes better to just pretend to be surprised in order to please her. Considering this, maybe Kogasa is unable to discern between genuine and fake shock, despite how she feeds by surprising people. It is unknown if a person pretending to be surprised provides her with any sustenance, although it does make her happy.

Kogasa seems to have some interesting interactions with the fourth wall, such as her stated failure to defeat Yoshika Miyako in Ten Desires due to a "time out", her appearance on the Undefined Fantastic Object CD despite being stated by ZUN to not be involved with the story (the "surprise" coming from seeing her when you open the case), her appearance as the Undefined Fantastic Object extra-stage mid-boss despite not having any relation to the story, which comes complete with a "Surprise!" sound effect to hammer the point home (the only extra-stage mid-boss in the series with no real involvement in the story), and dropping the first full power-up in Ten Desires upon her defeat. It is unknown if this is an in-story canon ability (after all, one can't be held back by common sense in Gensokyo) or just an out-of-story running gag.

Judging by the names and graphics of her danmaku, Kogasa appears to use rain and light attacks in her spell cards (including a rainbow). From a statement by Hatate Himekaidou, the extremely large spinning danmaku orbs that Kogasa throws are actually umbrellas, which creates an awkward sight of an umbrella attacking by throwing other umbrellas. Her train spell cards are actually extremely dense umbrella barages thrown so fast and so close together that they appear to be a train. Her "Karakasa Surprising Flash" seems to be a blinding flash of light. Finally, her "Umbrella Cyclone" spell card and the fact that her rain attacks can be angled may indicate she may use stormy winds as well, but this is uncertain. 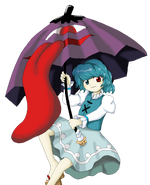