Member of the Galaxy Soldiers

Help Bojack and the Galaxy Soldiers conquer the universe.

Kogu (also known as Gokua) is a member of Bojack's crew called the Galaxy Soldiers and a supporting antagonist in the Dragon Ball Z film Bojack Unbound.

He was voiced by Toshiyuki Morikawa in the Japanese version, and by Ethan Rains and Paul Bandey in the English version.

Like Bojack and the rest of the galaxy soldiers, Kogu was cruel and merciless.

Kogu has shown to be a heinous person by nature, he uncaringly fires a ki blast in an attempt to blindside Future Trunks, as well as having complete disregard for the Tournament rules (i.e. having a weapon on his person).

During his fight against Future Trunks, he displayed many signs of arrogance, telling the latter that he was someone not to be trifled with. Ultimately this aforementioned trait is what caused his death, where instead of killing Trunks right away when he had the chance, he continued taunting him.

Not much is known about Kogu except that he is a skilled swordsman. Kogu worked for Bojack alongside Bujin, Bido, and Zangya as he came from the same alien race as them. After the Kai seal on Bojack was broken, Kogu rejoined forces with him and followed him to Earth. They took control over a tournament held by billionaire X.S. Cash in honor of his son's birthday. Kogu replaced one of the students of Mr. Satan meant to fight the finalists and took on Future Trunks.

Kogu utilized his sword skills against Trunks. Though Kogu entered his maximum power form, he wasn't able to fight Trunks as an Ascended Super Saiyan, and after getting his sword shattered, he was killed by Trunks punching him through the stomach.

Kogu has the typical superhuman abilities and energy manipulation powers that many characters in the Dragon Ball series have.

His skill in swordplay was enough to cause Future Trunks to be on the defensive during their battle.

Kogu can also transform into a maximum power form just like Bojack. This power helped him gain the upper hand against Future Trunks, however even this transformation couldn't handle the latter as an Ascended Super Saiyan. 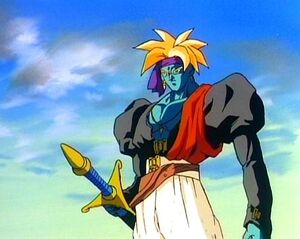 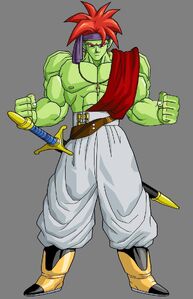 Kogu in his full-powered form. 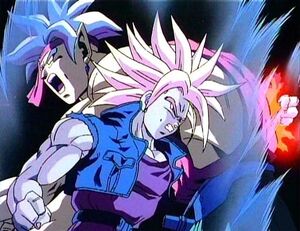 The Super Sayian Trunks kills the transformed Kogu with a single punch through the gut.