The Closed Eyes of Love

Someone Thinking of Nothing
Imaginary Personality Holder

Manipulation of the Subconscious

Koishi Komeiji is a character from Touhou Project who is the younger sister of Satori Komeiji and the extra boss of Subterranean Animism. She wanted to avoid the hate and dislike which Satori experienced due to her mindreading abilities, so she sealed away her own Third Eye. This backfired, since she gained the ability to read and manipulate people's subconscious, an even greater ability. However, she also became much more carefree as a result, and didn't mind as much.

She now spends much of her time wandering the world aimlessly. After her encounter with the heroine in Subterranean Animism's Extra Stage, however, she became curious, and wanted to start actually meeting people. 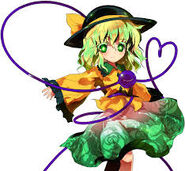 Retrieved from "https://villains.fandom.com/wiki/Koishi_Komeiji?oldid=3985070"
Community content is available under CC-BY-SA unless otherwise noted.