High-ranking official of the Anti-Recess Legion

Help Benedict to destroy summer vacation and stop the Interference of T.J. Detweiller even by Murder (failed).

Kojak is one of the secondary antagonists (alongside Fenwick) of the 2001 Disney animated film Recess: School's Out!. He is Dr. Phillium Benedict's chief lieutenant and high-ranking official of the Anti-Recess Legion.

He was voiced by Clancy Brown, who also played Dr. Neo Cortex in the Crash Bandicoot videogame franchise, Lex Luthor in the DC animated universe, General McGuffin in Disney's Wander Over Yonder series, Mr. Krabs in the SpongeBob SquarePants franchise, and Undertow in Disney's The Little Mermaid II: Return to the Sea.

Kojak first appeared when he, Benedict, Fenwick, and their henchmen infiltrate a U.S. military base to steal a tractor beam, as part of Benedict's evil plan to send the Earth to a new Ice Age to destroy summer vacation in his effort to raise test scores. After that, they head onward to Third Street Elementary School, which was closed for the summer and Benedict used to be the principal there before his former best friend Peter Prickly replaced him.

As per Benedict's orders, Kojak was assigned to keep the school clear any suspicion of outside authorities, which led him to develop a strong grudge against T.J. Detweiller (the protagonist of the film) for his suspicions (also for his "ugly bald guy" comment when he was spying on them). T.J. tried to inform Principal Prickly about this, but Prickly ends up being captured and locked inside the school. In order to avoid any more suspicions, Benedict ordered Kojak to pose as Prickly walking outside the school with two Anti-Recess Agents (which almost causes T.J.’s friends to believe he lied to them just to get them all back together).

When T.J. and his friends quietly sneak into the school, they start to investigate as they see Kojak and an agent detaining Dr. Rosenthal for failing Benedict, that is until they accidentally blow their cover. The gang manage to escape, except for T.J., who ends up being captured and locked in the stock room with the real Prickly by Kojak. After releasing Prickly and getting to his office through the vents, T.J. learns of Benedict's plan just before Kojak arrives and locks him and Prickly up again.

Eventually, T.J.'s friends manage to round all students for their to help reclaim the school, thanks to Gus Griswald's leadership skills. Despite their success, Kojak confronts the kids and is about to kill them. However, T.J. and Prickly (having freed themselves again) pour a vat of corn chowder on him, sending him to fall down the stairway with the pot on his head and saved T.J.'s friends' lives.

During the final battle between Benedict's men and the combined groups of the students and staff of Third Elementary, Kojak arrives to the scene, still having some corn chowder on his head and suit. Spotting T.J. in the scene, Kojak furiously attempts to pulverize him for humiliating him, but groundskeeper Muriel Finster arrives to the rescue, demanding Kojak to leave T.J. alone and challenge her instead. Finding the idea of beating an old lady to be amusing, Kojak accepts and prepares to fight her, but he underestimates Finster as she easily punches him down many times before socking him below the jaw, knocking him out once and for all. T.J. then thanks Finster for saving his life.

It can be implied that Kojak ends up being arrested and sent to prison along with Benedict and the rest of their men for their crimes. 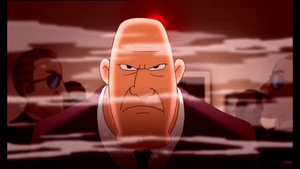 Kojak and several agents infiltrating a military base. 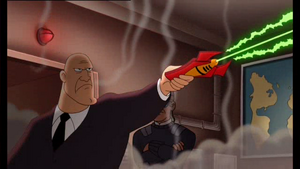 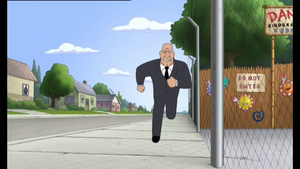 Kojak chasing off T.J. due to the latter spying on the school. 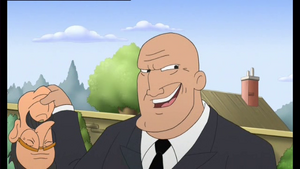 Kojak taking delight in impersonating Principal Prickly, declaring it like "taking candy from a baby". 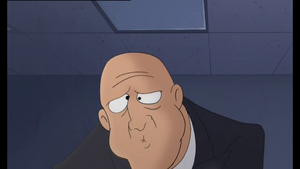 Kojak getting kicked in groin by Spinelli. 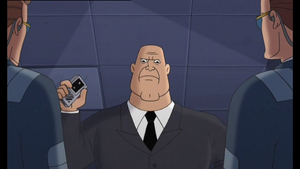 Kojak having the guards to catch T.J. in the school. 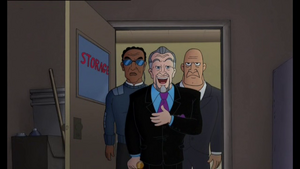 Kojak and an Anti-Recess agent standing by Benedict's side as the latter confronts T.J. and Principal Prickly in the storage room. 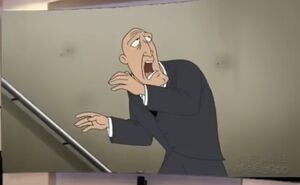 Kojak screaming as he is about to doused in corn chowder by T.J. and Principal Prickly. 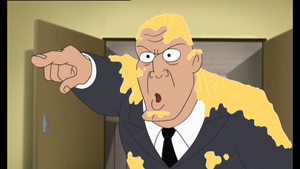 Kojak threatening to beat up T.J. during the fight between Benedict's forces and the students and staff. 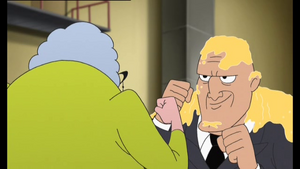 Kojak facing off against Miss. Finster. 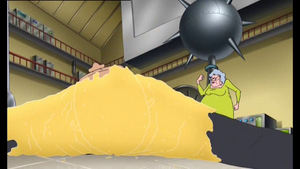 Kojak being knocked out by Miss. Finster before his arrest.