Play the role of the mastermind (formerly).
Put an End to the Killing Game to save everyone (kinda succeeded).

Kokichi Oma is the secondary antagonist in the videogame Danganronpa V3: Killing Harmony, serving as a obstacle for both Chapter 4 and Chapter 5. He is one of the sixteen participants of the Killing School Semester. Thought he is not actually evil, he is forced to put on a billings mask and manipulate Gonta into becoming the blackened and pretending to be the mastermind in order to stop the killing game. He was later murdered by Kaito Momota in a plan to end the killing game once and for all.

He was voiced by Derek Stephen Prince in the English dub version of the game, and by Hiro Shimono in the original Japanese version, the former previously dubbed Fuyuhiko Kuzuryu in the previous Danganronpa installments.

Kokichi has a very childlike appearance, as the keyword for his design was 'shota'. As such, he is quite short, being 5'1, with a thin build, making him the second shortest boy after Ryouma. He has very large, rounded, purple eyes which give him an innocent look, something he uses to advantage to get others to do things for him. Kokichi is also capable of making his eyes appear much sharper, or even somewhat inhuman, usually when angered. He had dark purple, wavy hair, with brighter purple tips. His hair sticks outwards from his face at the sides, though does not do so in the back.

Kokichi wears a white, straight jacket-like suit with several straps with red buttons around his arms. His shirt is double-breasted with mismatching buttons and held together with a series of metal clips. Just above the clips is a small, broken chain and his school emblem is printed on his right shoulder. The back of the shirt is decorated with stitches forming a series of Xs down his back, two buttons and a broken chain are attached near the hem beneath it. His pants are white, stopping just at the ankles with a dark belt going around the waist. They also have two fake belts sewn at the mid-thighs, resembling bondage belts. Kokichi wears a pair of plain, black shoes with purple heels. Around his neck, he sports a signature checkerboard-patterned scarf. Kokichi's suit, upon closer inspection is rather ill-fitted with jagged edges.

In promotional art, he wears a dark cape with a high collar fastened with a large, metal clip. He also wears a military-style peaked hat with gold emblems.

Kokichi's voice is usually very childish as his appearance would suggest, but can switch to a much deeper, mature one if he is being flirty, intimidating or angry. This is more prominent in the original Japanese audio.

Described by Shuichi Saihara as "the human embodiment of a lie", Kokichi is a schemer who compulsively or pathologically creates lies and while putting on his villainous persona he freely states whatever he's thinking, regardless of how it makes others feel. He often says things in an attempt to pester the others, such as constantly teasing Keebo and Miu calling them nerds And Maki After he reveals her talent. Because of this, Kokichi is easily capable of manipulating the class trials, often leading the others into dead ends or in an attempt to intimidate the culprit.

After the conclusion of the fourth class trial, Kokichi mourns for the now deceased Gonta accidentally letting his mask slip, only to reveal it as a lie soon after and state that he'd never cry for him reaffirm his villainous mask do the mastermind does not suspect him. From this point onward, Kokichi's mischievous and somewhat childlike demeanor is dropped, with Kokichi now acting cold, uncaring and nearly insane to cut his ties with everyone to peeper for his plan. He claims to enjoy the suffering and pain of others, with the Killing Game serving as a perfect source of it which is another lie and apart of his mask.

In spite of the antagonistic mask he tries to put in , Kokichi does indeed show a compassionate side; albeit one that is rarely seen by the other students. During his private conversation with Kaito in Chapter 5, Kokichi expresses his true feelings towards the Killing Game, stating that those who are enjoying the students' suffering "piss him off" and that he had to "lie to himself" in order to get any enjoyment out of it. Kokichi considers lying to be a major part of who he is, believing lies to be just as - if not more - important than the truth. He also claims to use them as a way to entertain those around him.

Kokichi is capable of displaying empathy, but tries his best to make it seem twisted . He becomes upset when Himiko refuses to acknowledge her true feelings concerning her grief over Tenko and Angie's deaths, prompting her to finally face her emotions. He also appeared genuinely saddened by Kaede's execution, saying "[she] wasn't boring", which is a very high compliment from him. Conversely, he is uncaring about the majority of the students, treating their deaths as trivial or entertaining to keep up appearances .

Kokichi has a vendetta against killing, and as such hates the killing game. He also loathes Maki, possibly due to her occupation as an assassin. He openly mocks and antagonizes her at every opportunity, driving her to nearly strangle him multiple times. Kokichi often encourages the class to turn against Maki and tries over and over again to isolate her from everyone else, citing the fact that she has killed before and cannot be trusted. He is also willing to drag Kaito into their feud, insulting and harming the astronaut in order to enrage Maki and even using it as a key point in his last-ditch attempt to defeat Monokuma.

Kokichi's hatred of the killing game drives him to end it at any cost. He sacrifices both Gonta and Miu in an attempt to mercy-kill the entire class by having them vote incorrectly for the killer. These acts shatter any trust the class had for him and even lead Shuichi, who is usually very compassionate, to tell Kokichi he will always be alone. Later, the supreme leader finally reveals the secret of the outside world to the remaining students- that the world was actually destroyed and they are the soul survivors of humanity . Immediately after he declares himself the mastermind and hijacks the exisals to kidnap Kaito in an attempt to make everyone lose the will to continue the killing game. Unfortunately, the true mastermind gives everyone, save Kokichi and Kaito, a flashback light detailing their past as 'beacons of hope' while Kokichi was an evil 'Remnant of Despair'. This caused Maki to make an attempt on Kokichi's life, which he ultimately decided to sacrifice as a final attempt to end the game.

He appears to be extremely distrustful and paranoid of everyone around him, refusing to divulge information about himself. After his death, Shuichi and Maki visited his room where they discovered Kokichi had been hoarding evidence from previous trials and keeping track of murderers and victims. Notably, he wrote "trustworthy?" next to a portrait of Saihara, further demonstrating his distrust. His lying made it in turn, impossible for anyone else to trust him, and he opted for unethical and even cruel measures to get people to cooperate with him. When the Motive videos were given out, he suggested the class watch them together to prevent a murder, only for his idea to be shot down as everyone believed his goal was to incite a killing but in truth if this had happened a killing would have been less likely by separating people who had too much an to little to live for. He then manipulated Gonta into kidnapping everyone, allowing Kokichi to steal the videos and watch the videos, though he was unable to force anyone else to view them, which allows a murder to happen. 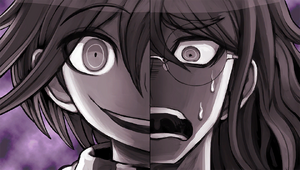 Kokichi revealing himself and Gonta as the "Killing Game Busters", 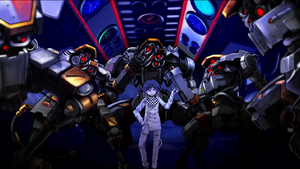 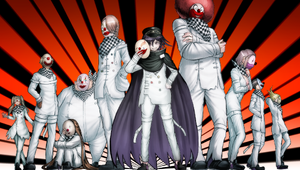 Kokichi with the other members of D.I.C.E., 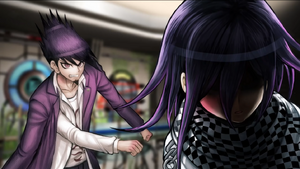 Kokichi after being punched by Kaito, 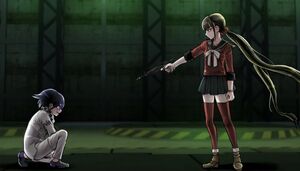 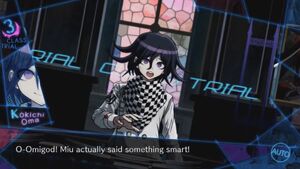 Kokichi in a Class Trial. 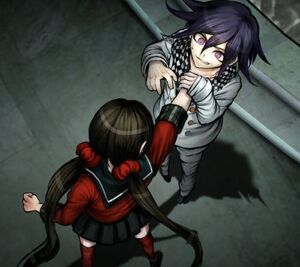 Maki choking Kokichi.
Add a photo to this gallery

Retrieved from "https://villains.fandom.com/wiki/Kokichi_Oma?oldid=4254537"
Community content is available under CC-BY-SA unless otherwise noted.