Koko is an 18-year-old poor girl and the Book Keeper of the Mamodo Zofis. Koko is a warmhearted person and Sherry has became her best friend because she saved the rich teenager from the death and gave her a reason to keep living while they were children. However, when Zofis manipulated Koko's heart to help him on the Mamodo Battle, Sherry entered the battle with the sole intention of rescuing her.

When Sherry suffered heavy abuse from her strict mother and attempted suicide because of it by jumping off a bridge during a rainstorm, Koko saved her life by jumping into the river and pulling Sherry out. Koko then gave Sherry the will to live on when she told her to not throw her life away when times were harsh because she would never find the happiness waiting for her when she got older if she did, and that there was always light at the end of the darkness. From then on, the two were best friends to each other, and though Koko grew up in poverty and lived on the streets and Sherry grew up in a world of privilege, they vowed that someday they would both find happiness in life.

As they grew older, though, both Koko and Sherry continued to live separate lives, but remained friends. However, throughout her life, Koko was the target of immensely harsh treatment from her fellow villagers due to her financial status; because she was poor, her family was forced to steal in order to gain the little food and comfort they had, and Koko herself was labeled as a thief because of it, even though she was innocent. Realizing that she would never be worthy in their eyes, Koko chose not to give in to despair or the harsh judgments of her neighbors and focus all of her energy into her work and studying for school. When Koko was finally accepted at a prestigious college, Zofis appeared and told her about the battle for Mamodo King, and offered to help her get revenge on the city that she suffered in. However, Koko, being the gentle person she was, refused to join Zofis in battle, as she was incapable of hurting others. With this, Zofis unleashed his manipulative powers in order to control Koko's mind by bringing all of her painful memories to the forefront and transform her once warm heart into a cold one; with this, the once-kind Koko unwittingly teamed up with Zofis, now just as cruel as him.

Koko's first act of cruelty was using her spellbook to take revenge on everyone who has ever been cruel to her, and destroying her own village. In the early stage of Zofis's control over Koko, Koko displayed a degree of insanity, as she could do nothing but smile and laugh over her newly acquired "power" and at the destruction of her town, and the only thing her mind was focused on was avenging herself for all the cruelty she suffered throughout her life.

When Sherry appeared before her and tried talking with her, Koko stated that as long as she had the power Zofis gave her, things such as university and work no longer matter, as she was happy that she could now make a new life for herself by eliminating those who mocked her and that if Sherry stood in her way, she would share the same fate. After a failed attempt on Sherry's life, Zofis took Koko with him to aid him in his plot to become Mamodo King; from then on, Sherry's main purpose was is to find Koko and defeat Zofis, so Koko could be released from Zofis' mind control powers and turn back into the friend that Sherry once knew.

Koko appeared again months after the incident along with Zofis (disguised as Milordo-Z) collecting the stone tablets that held within them the Ancient Mamodo, as well as present-day Mamodo to lead them. At this time, Koko appeared to act more in control compared to when she was first brainwashed, but because Zofis's control on her was still in effect, Koko was completely coldhearted; she continuously supported Zofis in his plot to use the Ancient Mamodo to eliminate the remaining competitors in the present-day battle for king, usually by hiding in the shadows while unleashing Zofis's spells on their enemies. She also received new clothes that reflected the lavish lifestyle she wished to lead. Eventually, she encountered Sherry again, and explained that Zofis wasn't controlling her heart in order to make her do bad things, but instead she performed those cruel actions of her own free will and that she enjoyed being with Zofis, because he gave her a chance to change and become the person she really was. Koko revealed to Sherry that for all the time they knew each other, no bond of friendship ever existed between the two of them, that Koko always hated Sherry because of their opposing positions in life - Koko being poor and Sherry being rich. To compensate for this, Koko continuously sought out her own special talent, something that she could always beat Sherry at, but Sherry always proved to be better than Koko in whatever activity they performed, further increasing Koko's hatred of Sherry and her life. Koko then claims that during Sherry's tenth birthday party, in an attempt to make Sherry miserable, she stole a priceless heirloom necklace and left a clue - Sherry's handkerchief - to make it look like Sherry was responsible; the scheme worked, as the police viewed Sherry as the only suspect, believing her actions to be stemmed from rebellion against her overbearingly strict parents. Sherry, at first, refuses to believe Koko to be responsible for the theft, as the real Koko was incapable of something so evil, but it is proven true when Koko show the necklace, leaving Sherry's spirit broken and Sherry herself unable to cast spells, giving Zofis the advantage.

Sherry continuously tries to deny that Koko stole the necklace and that she had carried a grudge against her for all the time they knew each other, but finds herself less convinced with every second, not knowing what basis she has to say it's a lie. (Zofis is surprised, and mentally reviews the forged necklace to try and remember where he might have erred in it's creation.) As she cries, her tears land on one of her rings, cracking it; this allows her to faintly hear Koko's voice and remember back to her tenth birthday party. Koko gave the ring to Sherry as a present telling her that there is an old legend stating that when people are going through hard times, it was the work of unseeable evil spirits playing tricks on them. The rings, which were carved out of wood and painted, could chase away those evil spirits because it was said that wood had the power to repel them, and the sun and the moon symbols painted on them represented the light of the real sun and moon that would shine on and protect them during hard times. Sherry then realizes that when Koko showed her the necklace, she actually wanted Sherry to look at the earrings she wore, which were created and decorated in the same style as Sherry's rings, the sun and the moon symbols crafted just the same. Sherry then hears the voice of the real Koko, begging Sherry to save her; with this, Sherry becomes free of her doubts and vows to save Koko once again. Despite Koko's harsh words, as zofis finds out that sherry been distracting the girl as becoming more shocked that her heart was not fully of hatred that koko is force and order to be spoken he force her to show Sherry the necklace which koko did but Sherry is convinced of the real Koko's kindness which she wanted her to see that the earrings telling zofis that the necklace was fake sherry tells him that rich people like her is not interested in fake jewelry which he was more shocked to tell sherry that he copied the same exactly necklace from her memory however koko panic and jump from the cliff to perform a commit suicide which at the end sherry eventually wins the battle.

With Zofis's defeat, Koko is reduced to a temporary comatose state, but Zofis laughs, explaining that for his final revenge on Sherry and Brago, Koko will never find happiness. He explained that he implanted a strong darkness in Koko's heart that, when mixed with her painful memories, resulted in the creation of an alternate, fiendish personality for Koko, the one that assisted him for so long. The evil Koko would disappear when Zofis's book was burned, and Koko would return to her original, kind-hearted self; however, because Koko received a special form of mind control that allowed her to retain her free will, she would also retain the memories of her evil self and all the numerous crimes she committed along with Zofis. Because Koko was a gentle person, it was inevitable that when she remembered everything, Koko would be so overcome with guilt that she would eventually lose the will to live on, but after being frightened by Brago which also finds out that he been afraid of him since day one and the mamodo world as well, Zofis submitted to Sherry's demands and erased Koko's memories of the battle for Mamodo King.

Koko was then taken to a general hospital in France; after awakening, she was told a cover-up story: that when her village was attacked by an evil person, she fainted from shock and was left unconscious for several months. Sherry then met with her, and after telling Koko that she submitted a leave of absence and that Koko could go to college when she got out of the hospital, and that the evil person that attacked her village was gone forever, Koko confronted Sherry, asking if Sherry had saved her again. Koko admits that even though she didn't remember anything, she knew that Sherry saved her from the evil one because she had always saved her and helped her through hard times even though Sherry was suffering a great deal more. Koko thanks Sherry for this, and the two friends tearfully embrace each other.

Koko is not seen or mentioned again for the remainder of the series in both the anime and manga, but it is assumed that she is now in college and beginning her new life.

Koko is a sweet kind gentle person who save sherry life when they were little kids when she became best friends with her but the opposite worlds that sherry was rich and koko was poor which is still didn't matter to them. They were still friends but unfortunately after meeting zofis and falling to the wrong hands he offer her to join his side to help him become Mamodo king but she kinda rejected which she was never interested in power and glory however he uses his hidden powers to show her the pain and suffering throughout every year that she been through and successfully brainwashed her into joining his side and and give revenge all those who hurt her this version of herself is very cruel and heartless and takes a joy of hurting others similar to zofis personality who force her to burn down her own village as zofis who was responsible for brainwashing her and changing her heart which he came in between there friendship which koko told sherry as long as she has this power that no one can never hurt her again which however evil koko Warn sherry if she gets in the way she will destroy her. 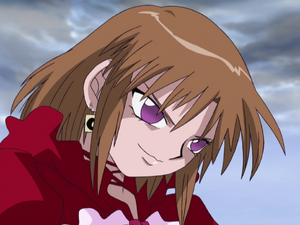 Add a photo to this gallery
Retrieved from "https://villains.fandom.com/wiki/Koko?oldid=3549592"
Community content is available under CC-BY-SA unless otherwise noted.