"Princess" (by her squad)

Get rich for her weapons dealings.

Koko Hekmatyr is the main protagonist of the anime/manga series Jormungand.

She was voiced by Anastasia Munoz in the English version and by Shizuka Itō in the Japanese version. She was also voiced by Marina Inoue in the drama CD.

Koko remains a largely enigmatic characters who appears to be quite cheery and happy and having a tendency to throw fits when frustrated or angered. However she is able to rebound quickly and rarely allows herself to remain stuck. She is also crazed, eccentric, exuberant, and rather childish ruthless, calculating, and determined woman who is a very dangerous opponent as she will not hesitate to use deadly force to reach her ends. Though occasionally, she has been willing to spare people. She also wishes to achieve world peace with her secret project between her and her friend, Minami "Miami" Amada by discouraging people from war though that will lead to 777,000 deaths as a result of its activation.

For Koko only accepts payment in the form of cash although she once made an exception by accepting diamonds. She refuses to take any credit and has met attempts to pay her with drugs by having her squad immediately kill the payees. Early on it was suggested that she has a tendency to sleepwalk but this was only shown once.

She is the daughter of shipping magnate Floyd Hekmatyar and the younger sister of Kasper Hekmatyar. Koko is an arms dealer and a member of HCLI's Europe/African Weapons Transport Division.

She leads a squad of bodyguards with whom she travels the world conducting business. Jormungand, a secret project between her and her best friend Minami Amada provides the context behind her actions. 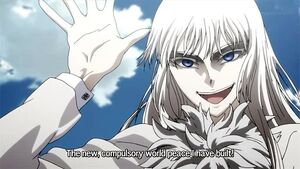 Add a photo to this gallery
Retrieved from "https://villains.fandom.com/wiki/Koko_Hekmatyar?oldid=4336764"
Community content is available under CC-BY-SA unless otherwise noted.