Reunite with Moka's inner self and not be seen as an outcast in her family.

Vampire
Kokoa Shuzen is a major antagonist turned anti-hero in the manga/anime series Rosario + Vampire. She had debuted in the second manga serialization and anime adaptation. She is the younger half-sister of Moka Akashiya who hates Moka for sealing away her inner personality, whom she adores and loves. Her villainous traits are ranked up considerably in the anime, with her outright despising Outer Moka and having a deep envy for Tsukune.

She is voiced by Chiwa Saito in the Japanese version of the anime and Kira Vincent-Davis in the English version, the former of whom also voices Homura Akemi and Nureha.

Bearing a similar appearance to Moka, except for her flaming orange red hair (though it is stated she dyes her hair this colour) and green eyes, she arrives as a first-year student to Yōkai Academy. Like her sister, Kokoa is also a vampire, but her powers are not sealed and does not carry the same supernatural strength Moka possesses, supposedley because she was still young. To compensate, she has a pet bat, Kou (Nazo Koumori in the anime), that can transform into a variety of weapons and wields it with enough strength to make herself formidable. 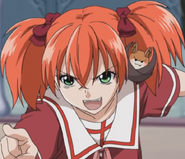 Kokoa's defeat in Rosario + Vampire Capu 2 (Episode 2)
Add a photo to this gallery
Retrieved from "https://villains.fandom.com/wiki/Kokoa_Shuzen?oldid=3370903"
Community content is available under CC-BY-SA unless otherwise noted.