Villains Wiki
Register
Don't have an account?
Sign In
Advertisement
in: Spoilers, Mature, Kimetsu No Yaiba Villains,
and 64 more

Kill the Demon Slayer Corps (failed).
Serve and help Muzan Kibutsuji achieve his goal (succeeded until his death).
Kill his twin brother, Yoriichi Tsukiguni.
Create and master a new form of breathing, the Moon Breathing.
Escape death from the effects of being cursed to die at age twenty-five by the demon slayer marks (all succeeded).
Surpass and become stronger than Yoriichi (failed).

Kokushibo (黑死牟) is the secondary antagonist of the manga/anime series Demon Slayer: Kimetsu no Yaiba. He is Upper Rank One of the Twelve Kizuki, and the archenemy of his younger twin brother, Yoriichi Tsugikuni.

It was also revealed that he is also the ancestor of Yuichiro Tokito and the Mist Hashira, Muichiro Tokito, before becoming the strongest of the Upper Ranks and the right-hand man of Muzan Kibutsuji.

His real name is Michikatsu Tsukiguni (繼國 巖勝) who is the elder brother of the first Sun Breathing user, Yoriichi Tsugikuni, and it's speculated that he is also a member of the Breathing Styles User because of his skills and the fact that he created his own breathing style derived directly from Sun Breathing, Moon Breathing.

Kokushibo's physical appearance shares a striking similarity with Yoriichi, his own brother. He has long black hair of which he kept as a ponytail. Before his turning point, he shows no difference to normal human. However, after becoming a demon, his appearance significantly changed, with his face covered in three sets of yellow eyes with red sclerae, with six eyes in all.

Mysterious, composed, grim, serious and yet somewhat honorable, Kokushibo is a serious person who loves to fight, and never plays around. He is also the most loyal enforcer of the Upper Ranks of the Twelve Kizuki, willing to punish Akaza for breaking the rule and attack Doma, though he does suggest Akaza to fight Doma and earn his place if the latter really disgusts him.

Despite being a demon, Kokushibo relies more on his swordsmanship and Moon Breathing style techniques rather than using the supernatural Demon Blood Arts. His past also revealed himself to be a distraught and broken man who was sad over his shortened lifespan and with a great fear of death, as well as a grudge born out of jealousy towards his younger brother to the point of making a notion to kill him.

In spite of his cruelty, Kokushibo is also an honorable person who gives respect to opponents he considered worthy. He is more prone to making humans into demons if he considered them to be worthy of use or being respectful warriors with a sad past, and unlike Muzan and Doma, it was suggested that he genuinely valued their strength and sees them as birds of a feather to himself.

Even so, deep down, he was a broken man who was feared of his own demise and was deeply jealous over his brothers' survival even with his mark, and he will hunt him down and kill them because of such jealousy.

However, it is shown that Kokushibo could never truly hate his brother, and loves him immensely deep down, to the point of breaking down to tears mid-battle with the Demon Slayers as he recounted a flashback. Despite all his actions, misdeeds, and crimes he had comitted, Kokushibo was a shattered man who couldn't handle the weight of such unfathomable burdens. At the time of his death, the latter lamented and regretted his choices in life. Kokushibo prevented his natural demon regeneration, and let the Demon Slayers cut him down, saying that he didn't want to live anymore, and that he was cruel to not be human. Kokushibo died wondering why he even was born, full of sorrow and melancholy for not accomplishing anything that he wanted.

Demon Slayer Mark (鬼殺痣, Kisatsu Aza): A special Mark worn by certain "awakened" Demon Slayers that resembles demon crests. Its specific abilities are unknown, but what is know is that it drastically improves the abilities of the Demon Slayer, making them much stronger, faster and able to react quicker than what they can achieve normally, though at the cost of being cursed to die at the age of 25. As a demon, not only was Kokushibo no longer bound by the curse, but the Mark's abilities were enhanced even further than when he was a human.

Moon Breathing (月の呼吸, Tsuki no kokyū): Like Kaigaku, Kokushibo was a Demon that utilized Breathing Styles. His combat style, in particular, is one of the most dangerous and powerful combat styles displayed thus far. The Moon Breathing combat style mimics crescent shaped moons with every sword slash conforming to the shape of a crescent moon. Enhanced with his Blood Demon Art, he can create many chaotic crescent moon blades when slashing that vary in length and size in crescent shaped sword attacks. Kokushibo himself had continued to develop this breathing style and had created over a dozen techniques over the centuries he had lived. 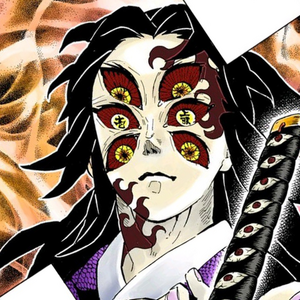 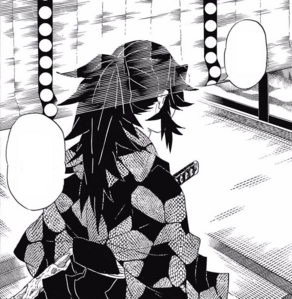 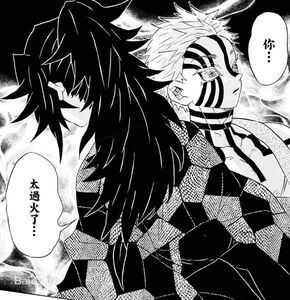 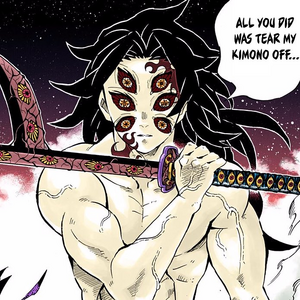 Kokushibou with evolved form of sword