Mortal Kombat: Defenders of the Realm

Fighting the warriors of Earthrealm.

Komodai is a minor antagonist in the cartoon Mortal Kombat: Defenders of the Realm. He only appears in the episode "Acid Tongue".

He was voiced by Joshua Blyden.

Komodai and a team of Saurians break through a dimensional portal connected to Earthrealm. They fight the Earthrealm's warriors but lose. Komodai managed to damage the robotic arms that belong to Special Forces agent Jax Briggs. The Saurians and Komodai retreat back through the dimensional barrier. Later, Komodai returns to Earthrealm and captures Sonya Blade. He uses her as a ruse to fight Jax again. When Jax arrives to rescue Sonya, he and Komodai start their rematch. Komodai is defeated again. He is sent back through the dimensional barrier and he does not return. What has happened to him afterward is not shown or mentioned. However, the rest of the Saurians are unaffected. 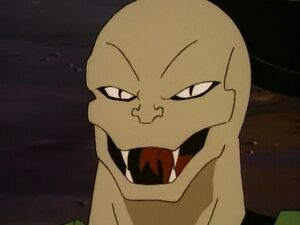