Destroy the Master Unit: Amaterasu to end her family's tragedy.

Take her revenge on Yuuki Terumi and Hades Izanami for using her.
Change the world through destruction and recreation.

Konoe A. Mercury, more commonly known as Nine or Nine the Phantom, is a major antagonist in BlazBlue. She was a witch and formerly one of the Six Heroes, until she was brainwashed by Yuuki Terumi into becoming the villainous Phantom.

She was voiced by Ayumi Fujimura and Rie Tanaka in the Japanese version, and by Amanda Céline Miller in the English version.

Konoe was a witch who went by the name of Nine. She had long, pink hair and dresses like a stereotypical witch. The name "Nine" comes from her being the ninth member of the Magic Guild's Ten Sages. Celica A. Mercury is her sister, Shūichirō Ayatsuki is her father, and her mother is deceased; she is the mother of Kokonoe. Nine's role in the story is further explained in the novel, BlazBlue: Phase 0. She tells Ragna to beware of Terumi.

She passed down her knowledge of magic to mankind during the Dark War. During the Dark War, she created the Nox Nyctores in order to help humans fight against the Black Beast. After the war, she discovered what Terumi's future plans were, and he killed her (this action is why Kokonoe despises Terumi). She created the Nox Nyctores using human transmutation, a process that requires thousands of human souls. Due to similarities in their appearance and abilities, Phantom may have some connection to Nine. It is notable that in Lambda's arcade mode, Hazama tells Kokonoe that the magical power he used to create Mu belongs to Nine. In the Extra Story, "That Which Is Inherited", it is revealed that the process through which the Nox Nyctores were created involved the compressing of seithr into a solid unit, then implanting the unit with the soul of a Black Beast. This compression spell, known as "Snap Weapon: Infinite Gravity", was used by Nine to create the Nox Nyctores and defeat the Beast, and later by Kokonoe to implant a Black Beast's soul into Ignis.

Nine appears again in BlazBlue Continuum Shift as Phantom. She is now under the Mind Eater curse which gives control of her to Hazama. This curse is then lifted in BlazBlue Chronophantasma, However during the events of Central Fiction it was revealed that Nine was never evil just misguided, And at the end help Ragna to defeat Izanami.

Nine has long bright pink hair with bangs that cover her left eye and yellow eyes. She wore a purple witch hat and a Magic Guild uniform with the additions of a purple ribbon tie and cape, a long black strap attached to her sleeves, long black legging curves that reach to her mini skirt, and black slippers.

In the Dark War, she wore a black mage coat, loosen and opened that shows her sleeveless white collar shirt with purple tie.

In BlazBlue Centralfiction she wears a revealing purple and pink dress with stockings. Her outfit also has detached sleeves, a cape, black gloves, pink and purple high heels and her signature witches hat. Her hair is also longer and wilder , her nails are longer too and are more like claws.

Nine is a person who likes to do things her own way, a trait shared by her daughter. She's a kind-hearted individual who cares about her friends, especially her younger sister Celica. However, she is not easy on Kazuma. Although she seems to have a mature and serious personality, she can be somewhat impulsive and violent when angered (as shown when she attempted to use a fire spell on Bloodedge for annoying her). She was this way even with Jubei before falling in love with him. 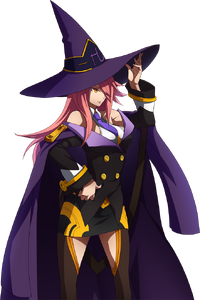 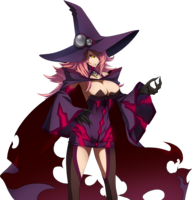 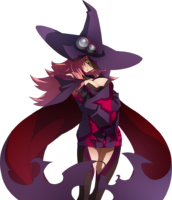 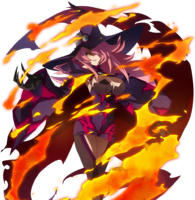 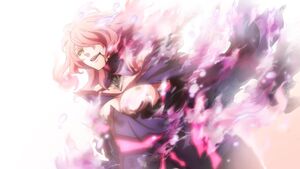 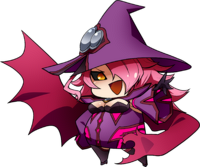 Retrieved from "https://villains.fandom.com/wiki/Konoe_A._Mercury?oldid=4198479"
Community content is available under CC-BY-SA unless otherwise noted.