Kill Wikus van de Merwe and all of the Prawn species (failed).

Colonel Koobus Venter is the main antagonist of the 2009 science fiction action film District 9. He is portrayed as a ruthless mercenary working for the corrupt business MNU who kills the Prawn aliens with sadistic pleasure.

He was portrayed by David James.

Venter is a ruthless, xenophobic PMN soldier sent to capture Wikus van de Merwe, a bureaucrat of the Multinational United and the film's protagonist who became exposed to a strange black fluid that begun his slow and abnormal transformation into a Prawn, the alien species living in the shantytown called District 9 beside Johannesburg, South Africa.

When Wikus and a Prawn named Christopher Johnson raid the MNU laboratory to retrieve the container holding the black fluid, Venter is sent out to capture him alive. Chasing them into District 9, after Wikus turns against Christopher to activate the dropship himself, Venter tortures Christopher for the location of Wikus, taunting him of how he enjoys watching Prawns die. Deciding to go back to save Christopher, Wikus activates a Prawn battle suit and engages the mercenaries in a fierce battle while Christopher and his son CJ ride the dropship to the mothership.

After a climactic battle, Venter manages to cripple Wikus' battle suit, who was nearing the end of his transformation, and mocks Wikus while stating his intention to kill him. Before he was able to kill him, a group of Prawns arrives at Wikus' aid. The Prawns take their revenge on Venter by tearing him to pieces and consuming his remains.

Venter is a violent, sadistic, and cold-blooded mercenary. He despises the Prawn species and is willing to kill them in any manner possible, outright admitting to enjoy watching them die. He will treat anyone or anything violently if they stand in his way. 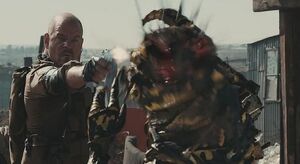 Venter murdering a Prawn who attacked Wikus before he became a fugitive. 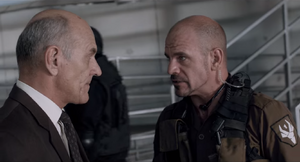 Venter telling Piet Smit that he will find Wikus. 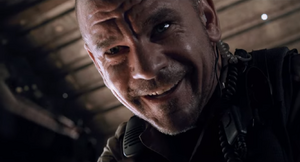 Venter as he tortures Christopher. 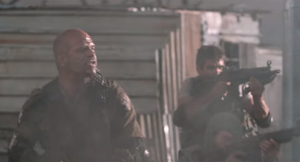 "He's headed for the dropship! Cut those f*ckers off!" 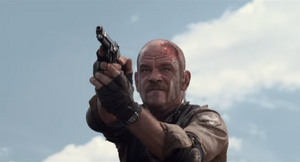 Venter demanding the approaching Prawns to stay back. 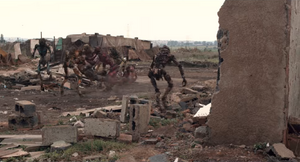 Venter's demise as he is ripped to shreds by the Prawns he tortured over the years.