Defeat Mario and stop him from reaching King Bowser.

The Koopa Bros. (Japanese: ノコブロス, Noko Burosu) are the bosses of Chapter 1 of Paper Mario, and the second beatable boss in the game. They are a quartet of ninja-like Koopas who are always trying to act cool. They work for Bowser. Their names, corresponding to the color of their shells, are Red, Black, Yellow, and Green. Red is their leader.

The Koopa Bros. were chosen by Bowser to guard Eldstar, the first Star Spirit. They kept him inside their fortress, the Koopa Bros. Fortress. They also locked Bombette the Bob-omb up in a cell because while they were bossing the Bob-ombs around and making them do all the work around the fortress, Bombette exploded next to them. They locked the other Bob-ombs up with her to prevent a Bob-omb rebellion.

To prevent Mario from reaching their fortress, the Koopa Bros. disguised themselves as Toads and blocked the road to Pleasant Path, but Merlon revealed their true forms and they ran. Black told Red when Mario arrived at the fortress. Green locked keys and items inside cells so Mario couldn't get them, and Yellow set a trap for Mario to fall into the jail cell. When Mario reached the top of the fortress, Black, Yellow, and Green set three bill blasters on Mario, but he destroyed them and fought the Koopa Bros. inside a Bowser tank, trying to make him think that they were really Bowser. The tank was destroyed, and the Koopa Bros. fought Mario. Once defeated, they fell over the edge and into the prison cell, which was patched up from when Bombette blew up one of the walls.

Despite this, they somehow managed to escape, and became the defense for the final guard door in Bowser's Castle. However, before they could fight Mario, Jr. Troopa appeared and defeated them. They have not been seen since (except in the credits). In fact, it is unknown if they survived.

In the credits parade, the Koopa Bros. are seen on top of a parade car resembling the Bowser tank, and are blown up by four Bob-ombs.

The Koopa Bros. start out inside a Bowser tank with 10 HP, an attack power of 1, and a defense of 1. Mario must hammer him and have Kooper or Bombette attack him. The tank has 10 HP. Once the tank is destroyed, the Koopa Bros. will appear. Whoever attacks next depends on who attacked last: If it was going to be the fake Bowser's turn, it will then be the Koopa Bros.' turn. If Mario can defeat the Koopa Bros. on a turn before his partner attacks, the partner will be the next one to attack. The Koopa Bros. each have 5 HP, and are standing on top of each other. It takes a few attacks to knock them down, but Bombette's Bomb attack only has to hit them once to knock them over, flipping them on their shells. After this, they can be treated like regular Koopas, but can jump on top of each other again. Once all of them are defeated, Mario wins. 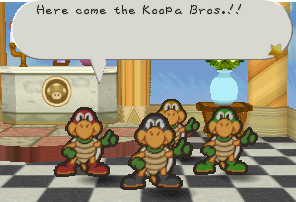 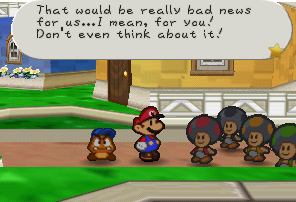 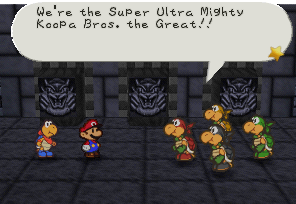