Steal coins and stars from the player.

Prevent the player's character from winning.

Koopa Kids are Bowser's henchmen in the Mario Party series. They appear as board hazards in the first four games, in which they steal coins or stars from the player. They appear as miniature versions of Bowser.

Baby Bowsers appear on the final board, Eternal Star. Seven of them appear on said board and appear in random locations. They can be defeated by playing a special and short minigame with them. Once a player defeat's one, they receive a star.

A Baby Bowser appears in all boards to steal coins from anyone who passes him. They appear in every Item Minigame (except Bowser Slots) as attempts to make the player lose.

A Baby Bowser hosts the board Bowser Land instead of Toad, who usually does.

Baby Bowser runs an item shop. And appears in item minigames like in Mario Party 2 as attempts to make players lose.

Baby Bowsers are now referred to as Koopa Kids. When a player lands on a Bowser Space, one would often appear descending on a balloon shaped in Bowser's shell, stealing coins from whoever landed on the space or every player. Two Koopa Kids appear in all three Bowser minigames, one can be seen fanning him. They both explain the rules for the minigames. They both appear in the minigame The Final Battle! as obstacles. In addition, the player can play as Koopa Kid in Beach Volley Folley, which is the first Mario Party where he's playable. One hosts the board Bowser's Gnarly Party.

Koopa Kid once again appears as a playable character and the three coloured Koopa Kids appear in Solo Mode as opponents in minigames. This is the last Mario Party where Koopa Kid is playable.

Koopa Kids return to their role as board hazards, one appears in the board Bowser's Enchanted Inferno!, where he launches the player out of a cannon. One also appears in the minigame Bowser's Lovely Lift! as a hazard. 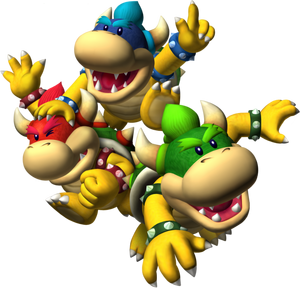 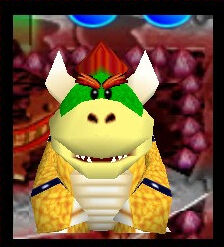