Control over his henchmen

Kopponen is the secondary antagonist in the 2012 animated film Tad, the Lost Explorer.

He is the leader of Odysseus Inc. bent on recovering the lost idol of Paititi. He is known to have a robotic hand, which he uses as his primary weapon.

Kopponen is voiced by Kerry Shale (who also voiced Tad in the film).

In the film, Kopponen first appears when a local brick-mason named Tad Stones arrives from the airport at Cusco, Peru with a stone key regarding to the location of Paititi. He had his men to kidnap him, assuming that Tad is Professor Humbert, a close friend of the famous archaeologist Professor Lavrof. However, he soon realizes Tad's true identity after Tad fearfully shows his passport. Tad would later escape with the help from Lavrof's daughter Sara and her close friend Freddy, causing an annoyed Kopponen and his men to pursue them.

Through the first half of the film, Kopponen and his men chase Tad and his friends until they finally catch them in a hot-air balloon (thanks of one of Kopponen's men firing a tracking device which Tad's dog Jeff accidentally swallowed). The Odysseus men then take the heroes to their dig-site near the desert, Kopponen is shown to have kidnapped Sara's fiance Max Mordon. After having Professor Lavrof to use the key to translate the location of Paititi, Kopponen orders his men to take Professor Lavrof and Max to the location while having others to remain here and watch the others. Needless to say, Professor Lavrof had deliberately lied in order to throw Kopponen off the track while allowing Tad and his gang to find out the true location of the lost city.

After 24 hours of digging at the wrong location, Kopponen suspects that Professor Lavrof was lying. It is later revealed that Max was the one who hired Kopponen and Odysseus Inc. to help him find the lost idol of Paititi, and was the one who planned the kidnapping of Professor Lavrof. Eventually, Max, Kopponen, and their men soon learn about the true location, so they head over there. During that time, Tad learns of Max's true nature after witnessing him signaling two of Kopponen's men to kill him and Freddy. Fortunately, Tad escapes, and as he hurries to the temple, he exposes Max's alliance with Odysseus Inc. to Sara and Professor Lavrof, causing the former to dump Max. With his cover blown, Max orders Kopponen and his men to continue on with the search while holding Tad, Sara, and Professor Lavrof in gunpoint. During the journey inside the temple, Kopponen loses much of his men due to the booby traps inside the temple.

After reaching a room full of quipus, Max ends up pulling the wrong one, causing the floor to break apart, sending the rest of Kopponen's men to fall to their doom. During his attempt to pull the right Quipu to open the chamber to the idol, Tad manages to defeat Kopponen by using a grappling gun to detach Kopponen's robotic hand from a Quipu, sending Kopponen to fall to his doom below. Of course, Max didn't care less about the fate of Kopponen and his men and carried on to uncover the idol himself, which only sealed his fate. 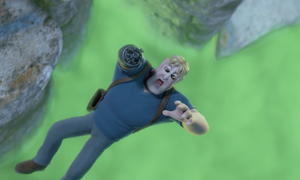 Kopponen falling to his doom.
Add a photo to this gallery
Retrieved from "https://villains.fandom.com/wiki/Kopponen?oldid=2700596"
Community content is available under CC-BY-SA unless otherwise noted.