Member of the Starforce (formerly)
Mercenary

Killing any people he and Ronan targeted.

Help the Kree defeat the Skrulls.
Kill Star-Lord and the Guardians of the Galaxy (both failed).

He is a Kree mercenary who used to serve at the Starforce team of the Kree Empire along with Carol Danvers until she defected them and became Captain Marvel. He then started to work for Ronan the Accuser in the latter's plot to destroy the planet Xandar and eventfully, kill the Guardians of the Galaxy.

He was portrayed by Djimon Hounsou, who also played Drago Bludvist in How to Train Your Dragon 2 and Mose Jakande in the global action blockbuster hit Furious 7.

Korath is a Kree soldier serving the team Starforce who serves the Supreme Intelligence.

However, it wasn't until 1995 when one of its members (Carol Danvers) learned that the Supreme Intelligence intends to wipe out the Skrulls (led by Talos in their quest to find a new homeworld) and that Yon-Rogg, Korath and the rest of the Starforce are involved in it the entire time.

Upon hearing of Carol's defection to the Skrulls, Korath aids Yon-Rogg and the other members of Starforce into tracking down Carol and several Skrull refugees inside a giant ship floating in Earth's orbit. However, Carol utilized her powers to fight back after freeing herself from the Supreme Intelligence's control, beating down Korath and the rest of Starforce before allowing the Skrulls to escape.

Following the defeat of Ronan's fleet, Korath was forced to retreat away back to their homeworld Hala along with Yon-Rogg, Ronan and the remaining Kree forces in disgrace. To avoid punishment for his failure, Korath turned over to serving Thanos as his new master and discarded his Starforce uniform.

Korath would be often trained alongside Thanos' adopted daughters Gamora and Nebula, making him one of the most deadliest and fearsome warriors in the universe.

Korath led a platoon of Sakaaran Mercenaries ordered by Thanos to take Nebula and Gamora to Praxius IX when a lead for the Orb appeared there. The lead turned out to be false, and the party left empty-handed. Shortly afterwards, Thanos ordered Korath, Gamora, and Nebula to work for Ronan the Accuser, who had made a deal with Thanos to find the Orb in exchange for Thanos destroying Xandar.

While hunting for the Orb on the planet Morag, Korath found that Peter Quill had already located and successfully stole it. Quill attempted to talk his way out of the situation by claiming to be a legendary outlaw going by the name Star-Lord, but Korath refused to listen and ordered his squad of Sakaaran soldiers to take Quill and the Orb to Ronan for questioning.

However, Quill managed to escape by shooting Korath in the chest and killing his Sakaaran soldiers. Korath survived due to his enhanced skin and body armor and attempted to kill his attacker. Quill escaped through the hole in the wall and Korath gave chase. Quill was just able to get to his ship by using a Gravity Mine to incapacitate Korath's soldiers. While Quill attempted to start his ship, Korath ordered his men to build a large cannon. By the time the cannon was ready, Quill used his ship to escape back to Xandar as Korath failed to shoot him out of the sky.

Korath returned to the Dark Aster and informed Ronan the Accuser, Gamora, and Nebula of events on Morag and of the outlaw Star-Lord, who his sources had informed him was planning to sell the Orb to a dealer only known as the Broker on Xandar. Ronan ordered Gamora to travel to Xandar and retrieve the Orb from Peter Quill when he attempted to sell it to the Broker, while Korath remained behind and continued to command Ronan's Sakaaran army.

Later, Korath was present when Ronan decided to betray Thanos and keep the Orb's power to himself. The Orb's power caused explosions on the ship as Ronan consumed the power into his hammer and told Thanos that after he had destroyed Xandar, he would kill Thanos. Korath was disturbed by this due to how extremely powerful Thanos is, and questioned his master's decision as he believed that Thanos was the most powerful being in the universe. However, Ronan reassured him that with the power of the Orb, Thanos would not pose a threat. Korath, despite not being happy about his master's newfound recklessness, stays on Ronan's side.

During the attack on Xandar by Ronan's forces, the Dark Aster was attacked by the combined forces of the Yondu Ravager Clan and the Nova Corps. Korath led a unit of Sakaaran soldiers in defending the Dark Aster, as they matched through the ship, they encountered Star-Lord, Drax the Destroyer and Groot who had boarded the ship during the battle with the intention of killing Ronan the Accuser. At that time, Korath in a rare sign of respect, finally addressed Quill as Star-Lord, much to Quill's delight.

A fight ensued between Korath's forces and the Guardians of the Galaxy, in which Korath fought Star-Lord, easily over-powering his human foe and mocking his attempts to kill Ronan. Their fight was interrupted when Drax the Destroyer defended Quill and attacked Korath. Korath briefly gained the upper hand, but the tables were turned and Korath was killed by Drax, who tore out a cybernetic part of his head while reciting his attempt at a metaphor.

Korath was ruthless, fanatical of ancient Kree laws and completely loyal to Ronan the Accuser. He also has genuine respect for Thanos whom he fears, calling him "the most powerful being in the universe". Korath was against Ronan turning against Thanos because of that. However, Korath retained his loyalty to Ronan and continued to follow his leader until their respective deaths in the Battle of Xandar. Korath seems to have no sense of humor, being confused at Quill nicknaming himself "Star-Lord". But the fact he keeps calling him by that nickname when they meet again shows he has a sense of honor.

Korath on a poster for Captain Marvel. 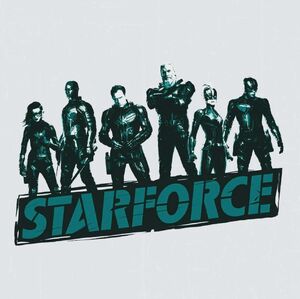 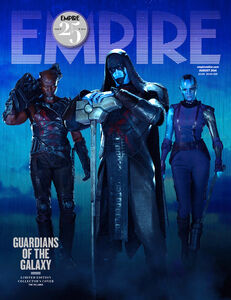 Korath with Ronan and Nebula on a Empire Magazine cover for Guardians of the Galaxy.