Michael Korvac (often called Korvac or The Enemy) is a fictional character that appears in comic books published by Marvel Comics. The character first appears in Giant-Size Defenders #3 (Jan. 1975) and was created by Steve Gerber and Jim Starlin.

Michael Korvac is a computer technician in the alternate universe Earth-691. When the Sol System and its colonies are conquered by the alien Brotherhood of Badoon in the year 3007 AD, Korvac becomes a collaborator and traitor to the human race. Caught asleep at a machine while working, the Badoon as punishment graft Korvac's upper body to a machine, effectively making him a cyborg.

Korvac is then transported through time by the Elder of the Universe the Grandmaster, who utilizes him as a pawn in battling the hero Doctor Strange and the Defenders.

It is eventually revealed that Korvac deliberately lost the fight so as to be able to discreetly scan and analyze the Grandmaster's cosmic power. Gaining several new abilities from this analysis, Korvac then kills his Badoon masters and plans to conquer the cosmos. Korvac recruits a group of aliens called the "Minions of Menace" and attempts to cause Earth's sun to go nova, but is defeated by the Guardians of the Galaxy and the time-traveling Thunder God Thor.

Korvac flees across time and space to the Earth-616 universe. Upon arrival, Korvac discovers the space station of the entity Galactus. While attempting to download the knowledge of Galactus from the station into his own system, Korvac is imbued with the Power Cosmic and becomes god-like. Korvac then recreates himself as a perfect humanoid form, and posing as a human called "Michael", travels to Earth with the intent of reshaping it into a utopia. Korvac, however, is pursued by the Guardians of the Galaxy, who join forces with the superhero team the Avengers in a bid to stop the villain.

Guardian member Starhawk finds Korvac and battles him in secret. Korvac, however, disintegrates Starhawk and then recreates him, but removes from the hero the ability to perceive Korvac in any way so as to avoid future detection. The Elder of the Universe known as the Collector foresees the coming of two beings that would be capable of challenging the Elders (Korvac and Eternal), and remakes his own daughter Carina into a being of incredible power to use as a weapon against them. Although Carina does meet Korvac, the two fall in love and she begins to sympathize with him. The Collector is defeated by the Avengers after a failed bid to "collect" and protect the heroes from Korvac, who upon discovering the Collector's plot disintegrates the Elder.

Iron Man eventually tracks Korvac to a residential neighborhood in Forest Hills Gardens, in Queens, New York. The entire Avengers roster, aided by the heroine Ms. Marvel and the Guardians of the Galaxy, confront Korvac and Carina, who pose as a middle class couple. Korvac's deception is revealed when Starhawk states he cannot see the man called "Michael". Realizing that he has been discovered, and that cosmic entities such as Odin and the Watcher are now aware of his existence, Korvac is forced into battle.

Korvac slays wave after wave of heroes, and is finally caught off guard and weakened by Captain America and Wonder Man. Although able to kill the heroes, Korvac is weakened further by the combined efforts of Starhawk, Iron Man, the Vision and Thor. Sensing that Carina now doubts him, Korvac commits suicide through an act of will. An angered Carina then attacks the surviving heroes, and is finally slain by Thor. The entire battle is watched by part-time Avenger Moondragon, who realizes that Korvac only wanted to help mankind, with his dying act being to restore the Avengers and Guardians to life.

It is revealed that Korvac discarded his power when near death after sensing that Galactus had activated the weapon the Ultimate Nullifier in retaliation for his previous intrusion. Korvac's suicidal act of will preserves his power and consciousness, which is sent forward through time to inhabit various descendants of his. Starhawk becomes aware of this, and the Guardians of the Galaxy pursue Korvac's essence through time. The power eventually reaches the year 2977 AD and inhabits Michael's father, Jordan, who is killed in battle with the Guardians. Jordan's widow, Myra, vows to teach the infant Michael that the Guardians were responsible for his father's death on the day of his birth.

Korvac is briefly resurrected in human form by the Grandmaster to battle Silver Surfer. When Korvac's attempt to use Captain America in a scheme to steal the power of a Cosmic Cube from Red Skull ultimately failed, Red Skull used his internalized Cube power to scatter Korvac across six dimensions.

In Avengers Academy, Korvac's wife Carina was mistakenly resurrected by Veil (believing that she is helping to resurrect Wasp). Korvac returns for her and Hank Pym offers to return Carina to Korvac, but she refuses to go with him. She chose nonexistence over him (even though she is apparently immortal, as is her father). A battle commences pitting Korvac against all current Avengers teams. He is weakened by them and then attacked by adult versions of the Academy's students. After a brutal battle, Veil phases into his body, which temporarily paralyzes Korvac, and Hazmat then completely annihilates Korvac with a projected blast of anti-matter.

Korvac was originally a normal man until the Badoon amputated the lower half of his body and grafted his upper body and nervous system onto a specialized computer module capable of siphoning energy from virtually any source. Korvac's mechanical module could also tap and synthesize any form of energy and concealed advanced weaponry.

After downloading information from Galactus' ship and acquiring the Power Cosmic, Korvac is capable of energy projection, matter alteration, teleportation, and manipulation of time and space. In his perfect human form, Korvac retained all his cosmic abilities and could use these to achieve virtually any effect.

Michael Korvac is also a brilliant computer scientist, a master strategist, and a formidable hand-to-hand combatant. 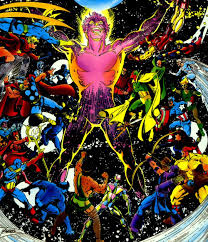 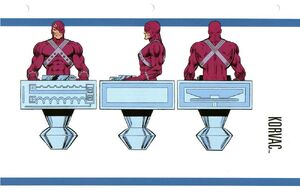 Add a photo to this gallery
Retrieved from "https://villains.fandom.com/wiki/Korvac?oldid=3190904"
Community content is available under CC-BY-SA unless otherwise noted.