Kou Tatsugami, also known as the Leo Zodiarts, is a Horoscopes Zodiarts who serves as Mitsuaki Gamou's bodyguard and the secondary antagonist of Kamen Rider Fourze.

He was portrayed by Kazutoshi Yokoyama.

Originally, Tatsugami was a street fighter without purpose before he was found by Mitsuaki Gamou, who easily defeated him and gave him both a Zodiarts Switch and purpose.

Kou is generally quiet and a skilled martial artist, serving as both Gamou's personal aide and bodyguard. He does not hesitate to attack anyone who threatens or dishonors Gamou, as well as anyone who seriously irritates him, even if the offender in question is a fellow Hororscopes member. This is shown that, even though he knows Fourze is important to Gamou's plans, after Gentarou pats Gamou on the shoulders and (rather enthusiastically and loudly) thanks Gamou after feeding him information during the Aquarius incident, Kou transforms into the Leo Zodiarts and attacks without prejudice, barely letting Gentaro transform, and not giving him the chance to use the Cosmic Switch.

He is extremely loyal to Gamou, following his orders to the letter and will not let anything come in the way of his master's plans, not even his fellow Horoscopes' incompetence, shown when he fought Fourze and Meteor as the Leo Zodiarts so that Libra could carry out his orders.

He has a habit of carrying two walnuts with him wherever he goes, shuffling them around in his palms. This actually serves as a sign to his patience, as when he runs out of patience, he crushes them.

As the Leo Zodiarts, he is the strongest of the four original Horoscopes, usually using sheer muscle and power to overwhelm his opponents. He is strong enough to shatter Meteor's Mars Breaker and his skin is tough enough to withstand the Meteor Storm Punisher, showing that he's beyond Cancer in terms of offense and defense, as he is more than evenly matched with the two Kamen Riders, even in their most strongest forms.

He is able to fire a shockwave attack out of his mouth that sounds like a lion's roar, which is strong enough to inflict damage. For close combat, he can transform his arms into two massive triclaws. Due to his tendency to rely on sheer power, he is often seen to be slow. To give himself an edge at times, Leo has the ability to use bursts of super speed to fight when he needs to, which is equally as capable of overwhelming his opponents as his use of sheer power.

Even in human form, he is a skilled fighter and incredibly strong, as he can crush walnuts with just his grip alone, single-handedly overpower several Foundation X bodyguards without breaking a sweat, and can even destroy Dustards sent his way without having to transform.

Kou has an unique ability to use other Horoscope Switches, not only transforming into other Horoscopes Zodiarts, but capable of unleashing the forms' full potential and use them better than their original users.

The kanji used in his given name Kō is the kanji used for the word "hoeru" which is a characteristic the lion is famous for.

Also, his surname is somewhat similar to "tategami", which means "mane", another characteristic the lion is famous for. 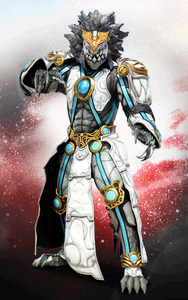 Leo Zodiarts
Add a photo to this gallery

Retrieved from "https://villains.fandom.com/wiki/Kou_Tatsugami?oldid=3849208"
Community content is available under CC-BY-SA unless otherwise noted.