Protect Kyouka Izumi from "The Light"

Kouyou Ozaki (In Japanese: 尾崎 紅葉, Ozaki Kōyō) is a member of the Port Mafia and a minor antagonist in the manga and anime series Bungou Stray Dogs. She acts as the mother figure of Kyouka Izumi and is one of the major mafiosi that tries to stop Kyouka's abduction. She is a direct reference to the Japanese author with the same pen name (who was actually a male in real life).

She is voiced by Ami Koshimizu who also voiced Ibuki Mioda.

Kōyō Ozaki is generally displayed as cold, mature, and serious. Despite this, it isn't rare for her to smile, especially when she gains the upper hand in combat. This could mean she has a sadistic side but she could also just be indifferent to violence.

She has a hatred of "the light" for its influence on Kyouka Izumi. She believes that Kyouka can only function as a cold-blooded assassin. Her special ability is extremely effective at killing but fails to have many nonlethal applications. Hence, she belongs in the Port Mafia and not the Armed Detective Agency.

Although a high ranking member of the Port Mafia, she has limited loyalty to the mafia. She held a grudge against the previous mafia leader but holds no such grudge against Ougai Mori. She cares deeply for Kyouka Izumi but is overprotective to the point of psychologically tormenting her into submission as to keep her away from "the light" of the Armed Detective Agency. The appeal of doing good deeds would draw Kyouka into a life of misery.

She has a deep hate for those that take Kyouka away from her, including Atsushi who Kyouka had grown fond of. She has proclaimed she would kill everyone involved in the abduction of Kyouka.

Kouyou Ozaki has been in the Port Mafia since she was a teenager. When she was young, she tried to run away from the mafia with a man she admired. The mafia, however, captured them and killed the man. Kouyou held a grudge against the current leader of the mafia but was willing to comply with Ougai Mori when he took the position as the leader of the mafia.

She eventually became an executive of the mafia. When Kyouka Izumi, a girl with a nearly identical quirk to Kouyou, was taken in, Kouyou took the job as being her acting guardian and mentor. Kouyou related to Kyouka, having the same powers and having a similarly tragic past, and started caring for her deeply.

When Kyouka defected, Kouyou eventually tracked her down while she was hanging out with Atsushi. Kouyou brought a set of minor mafia agents and planned on taking in Kyouka forcefully, threatening the life of Atsushi. The fight was going relatively well when the Armed Detective Agency members, Kenji and Kunikada intercepted the fight. They had a standoff when yet another faction showed up: The Guild. The Guild badly wounded everyone in both the Port Mafia and the Armed Detective agency instantly. The Armed Detective Agency backup arrived before the Port Mafia's backup, so they abducted Kouyou as a prisoner of war. 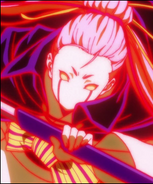 Golden Demon
Add a photo to this gallery
Retrieved from "https://villains.fandom.com/wiki/Kouyou_Ozaki?oldid=3539106"
Community content is available under CC-BY-SA unless otherwise noted.