Help the Alien God and the Crypters to erase the Pan-Human History.

Infiltrating Chaledea and causing it to be destroyed

Her roles varied depending on chapters, being a voiceless minor character in the Moonlight/Lostroom OVA, the main antagonist of its prologue chapter, a supporting antagonist from Lostbelt No. 1 to 3, a temporarily anti-heroine in Lostbelt No. 4, and a major antagonist in the following chapters.

She is, as far as we know, an Alter Ego-Classed Servant who serves the mysterious Alien God and assist the Crypters to destroy the Pan-Human History, but her role stays ambiguous as she always sabotage the Crypters' project and caused their downfall, successfully bringing down Kadoc Zemlupus and Ophelia Phamrsolone indirectly, making every remaining Crypters to be wary of her.

In addition, her Servant Form shows eerie similarity to the Lostbelt Assassin from the promotional trailers, though it's yet to be officially comfirmed that they are the same Servant.

She is voiced by Chiwa Saito, who also voiced Tamamo-no-Mae and her counterparts in Fate series, Homura Akemi in Puella Magi Madoka Magica, Nureha in Log Horizon, and Kokoa Shuzen in Rosario + Vampire.

SIN: The Land of Unified Knowledge

After the destruction of Norse Lostbelt, Kirschtaria summoned the remaining Crypters for another meeting, including a defeated Kadoc, who remained in Kirschtaria's Lostbelt. During the meeting, Koyaskaya arrived and started her pretentious weep for the demise of Ophelia.

Disgusted, Hinako Akuta called out Koyanskaya as the latter's mourning was fake, claiming she was even more disgusting than the problems caused by Chaldea. Blaming Koyaskaya as the reason for Kadoc and Ophelia's downfall, Hinako also stated that she was relieved that Ophelia died so that Koyanskaya wouldn't got her Mystic Eye as a collection.

Irritated, Koyanskaya talked back at Hinako and satried her uncaring attitude towards Ophelia, causing Hinako to get enraged and lashed out at the fox-human, revealing sharpened fang inside her mouth. Before a fight could ensued, Scandinavia Peperoncino stopped them from quarreling, before bluntly stating his sadness over Ophelia's passing.

After both sides were settled down, Peperoncino then proposed a funeral attempt for Ophelia. However, Hinako rejected an idea of funeral, saying she already prepared a bunch of flowers to mourn Ophelia. Then, Hinako left for the Chinese Lostbelt, but not before she stated to Kirschtaria that she never wanted Koyaskaya to enter her Lostbelt ever again.

Using teleportation via her Skill of Independent Manifestation, Koyanskaya later arrived at the new Chaldea now situated at the Wandering Sea, using the lipstick she gave to Goldolf to track him down. She later poisoned Ritsuka and Goldolf while the Chaldea Crew were planning to attack the Greek Lostbelt around Atlantic Ocean. Due to showing resistance to toxin, Ritsuka was just have mild discomfort but without risk of life. Nevertheless, Goldolf's lifespan was shortened into ten days and could only be saved by Koyanskaya's antidote.

Upon listening up to the news, Hinako angrily berated Koyanskaya, who was rather surprised due to the Chaldea crew's presence. Hinako tried to warn Emperor Qin Shi Huang, the King of Chinese Lostbelt based on the first Emperor of China, about Chaldea. In the meantime, Koyanskaya sent creatures from other Lostbelts into fields to attack people constantly, and was always annoyed that the Emperor cannot pronounce her name correctly.

At first, the Emperor ignored the news of Chaldea's arrival, trying to be friendly towards them, until he discovered that Jing Ke - his historical archenemy - was teaching people reading and writing poetry. Considering it to be an act led by the Confucianists, people whom he hated the most, the Emperor ordered Qin Liangyu, one of his Lostbelt Generals, to take away the Shadow Boarder and arrested Holmes, Da Vinci and Goldolf by force. In the meantime, he arrested Koyanskaya and put her under imprisonment after finding out the beasts that was attacking his people.

While being chained inside the jail, Koyanskaya was visited by Hinako, who claimed she had it coming and ignored her pleadge. She was then visited by the Priestess of the Alien God once more. Bitterly, Koyanskaya told the Priestess about how conservative Qin Shi Huang was. However, her words was overheard by the Emperor, who asked if she was talking to herself like crazy (due to the Emperor cannot see the Priestess).

As the Priestess silently left, the Emperor sent robots and put Koyanskaya into severe and constant torture, saying she had weighed a lot more than usual Heroic Spirits, much to his surprise. Koyanskaya pleadged to be spared and swore to leave Chinese Lostbelt, but the Emperor refused, saying she would go to other realms and wreck havoc if he released her. He then said Koyanskaya would rot in her prison for eternity before he left, leaving Koyanskaya shireking in agony.

Upon the wake of her constant failure and her temporarily partnership with the Chaldea crew, Koyanskaya was punished by the Alien God, who cut off one of her tails and expelled her from his faction. She later planned her own agenda to seek vengeance against the Alien God, even implied that she would become a Beast for real.

Currently, her position as an Emissary is replaced by Senji Muramasa, who is currently guarding Atlas, the Fantasy Tree in the Olympus Lostbelt, alongside Rasputin. However, Senji is secretly planning to destroy the Lostbelt by creating a special weapon alongside the essence of Lostbelt Hepheastus, who is still in secret league with the side of Pan-Human History. 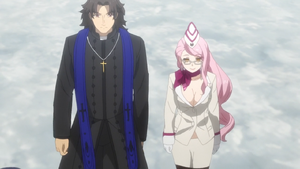 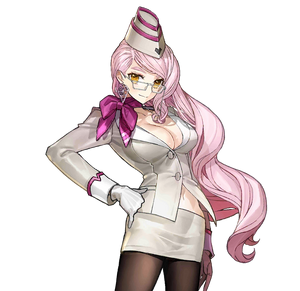 Koyanskaya as the fake secretary. 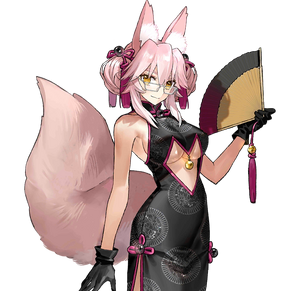 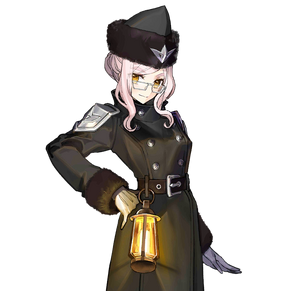 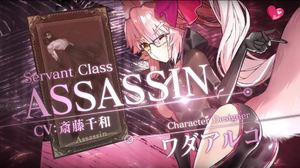 The Lostbelt Assassin in the one of the promotional trailers. 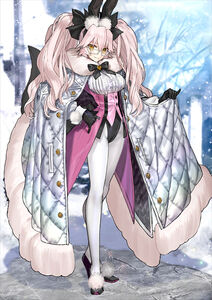 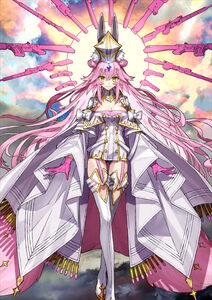 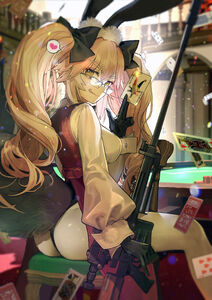 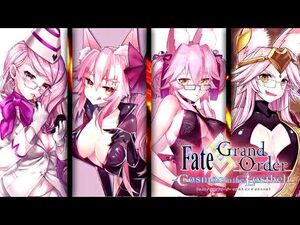 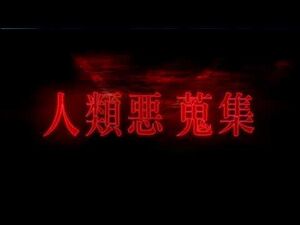