The Destroyer
The Destructor
The Traveler
The Divine Father

Being worshipped by his followers.

Travelling to other worlds for him to destroy.

Destroy the Earth as he did with many unidentified worlds upon his wrathful path.

Seek revenge on the Ghostbusters for the demise of his dark child Gozer.

Koza'Rai (sometimes known as Koza Rai) is an interdimensional demon warlord and the father of Gozer. He was so furious at the Ghostbusters for destroying his son, that he banished them to different time eras. Eventually, the Ghostbusters returned to the present day and defeated Koza'Rai with help from his daughter Rachel Unglighter.

This obscure dark lord seeks dominion ovee the conquest over time and space. He is said to have sired many offspring, including Gozer and Senta, and other lesser known deities.

In the 1950s, within Earth, there was a group of people the Temple of the Divine Father, a splinter faction from the soon-to-be remnants of the Gozer Worshippers, selected a woman known as Jacqueline Unglighter to bear the next child of Koza'Rai. Koza'Rai came to the mortal world to woe and later pervades his chosen earthly mate. Jacqueline gave birth to a half demon child, Rachel Unglighter, and fled with her.

Years after the defeat of the undead human despot Vigo the Carpathian, the Ghostbusters were attacked by another tyrant, but this one is the immortal Koza'Rai, enraged by the death of his Gozer, his fellow Destructor.

Rather than killing them, Koza'Rai banished the Ghostbusters to the passages of time. With them out of the way, Koza'Rai assumed his quest to finally reign supreme over all of reality.

Rachel alone modified the Proton Packs and Ecto-1 then set out to reunite the Ghostbusters. She believed defeating Koza'Rai in the present would erase the incursions on the overall timeline.

Koza'Rai influenced the creation of a Demon Collective based in New York during the Old West era, the release of the witch Morgan Le Fay in medieval times, and assaults on the Outer Colon on the planet Mars in the year 2060, where each of the founding 3 Ghostbusters happened to be stranded in.

In present day, Koza'Rai assembled his legion in New York and forced his human slaves to reconstruct Stonehenge in Central Park with the plan on generating a Devil's Shoe Horn that would banish all living beings to the Netherworld and simultaneously allow every ghost and demon to take its place. Rachel and Peter Venkman knocked over one of the pillars of Stonehenge.

The resulting reconfiguration had a reverse polarizing effect and pulled every ghost and demon into the Netherworld, including the "Divine" dark one Koza'Rai himself.

Koza'Rai only demonstrated the ability to teleport other beings to different times and breath fire from his mouth. Since he is a very powerful and mighty demon, Koza'Rai may have other powers at his command. 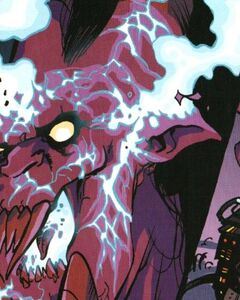 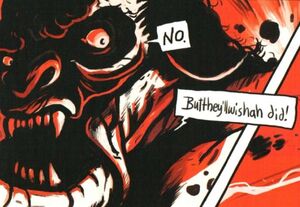