Assist the Dark Hunters in their quest of taking over the Matoran Universe.

Mutated Hybrid
Kraata-Kal is a minor antagonist in the BIONICLE series. It was a mutated Rahkshi, who was once created in an experiment by the Brotherhood of Makuta before making its escape during the Toa Hagah's rebellion. He later become the member of the Dark Hunters; the band of bounty hunters, criminals and mercenaries.

Kraata-Kal is a result of an experiment which was performed by Makuta Teridax, where he exposed a Kraata to a same substance that is used to transform a Krana into Krana-Kal. The result was a creature with much higher intelligence than an average Rahkshi, with a wider array of powers. Mutran then decided to give Kraata-Kal a number of unique weapons.

During the Toa Hagah's rebellion on the Brotherhood, Kraata-Kal along with Minion, an another experiment escape in the confusion as they were later found by the members of the Dark Hunters and recruited them into their ranks. However, Kraata-Kal would routinely ignore the mission objectives in pursuit of its own profit. As the punishment for this habit, the Shadowed One, the leader of the Dark Hunters permitted Vezok, a Piraka to attack Kraata-Kal and damage its armor.

Later when the two Dark Hunters members sent by the Shadowed One to search for Nidhiki and Krekka who were killed by Teridax, Kraata-Kal and the other Dark Hunters were ordered to defend the island from the attack of the army of Rahkshi, who were summoned by Teridax to attack the island of Odina as the distraction as he and Toa Vakama were searching for the Kanohi Vahi. During the battle, Kraata-Kal manages to defeat several Rahkshi.

Kraata-Kal was part of the team who was sent by the Shadowed One to track down the Piraka following their desertion of the organization. After the sinking of Voya Nui, however,

Following Teridax's death and the battle in Bara Magna, Kraata-Kal and the other Hunters immigrated to Spherus Magna.

Kraata-Kal was extremely intelligent and was also very ambitious. However, he was also known of being stubborn and rebellious.

Kraata-Kal has the degree of the elemental control over Darkness, Electricity, and Heat Vision, along with the larger armor, which was more durable than the standard Rahkshi armor.

Its armor is also fitted with various blades, claws and stinger which it can use in close-range combat. 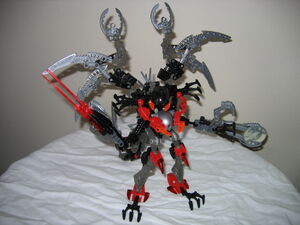