Krad is the main antagonist of the 2007 direct-to-DVD film Christmas is Here Again and its stage adaption.

He was voiced by Ed Asner in the film (who also voiced Hoggish Greedly in Captain Planet) and portrayed by Billy Breed in the stage adaptation.

Krad once supplied coal for Santa Claus to give to naughty children whilst nice children were given toys. However, Santa eventually decided to stop punishing naughty children, much to Krad's anger, who swore vengeance. In order to get back at Santa, Krad stole his toy sack. Santa could not make another sack as the one Krad stole was made from Jesus's baby clothes, which gives the sack the magical source of toys. Due to the theft, Christmas was cancelled and eventually forgotten.

Thirty years after the theft, a crippled orphan girl named Sophiana, an elf named Paul Rocco (who became frozen whilst trying to stop the theft), a reindeer named Dart, a fox named Buster, and a polar bear named Charlee set out to retrieve the sack from Krad and restore Christmas.

When the group arrive at Krad's lair, he manipulates Buster into betraying the others in exchange for cash. But Buster decides his friends were more important than money and frees them from the dungeon while replacing the sack with his cash bag. During the battle against the group, the group escape when Dart learns to fly, and Krad is defeated after Sophiana dumps all the coal in the sack onto him and his minions, trapping them. It is unknown if Krad and his minions survived the coal being dumped on them or if they were crushed to death.

In the film, Krad has black skin with yellow eyes with orange irises and yellow crooked teeth. He wears a red hooded cape and carries an black staff with a yellow orb on top.

In the stage show, Krad is Caucasian with a bald head, a black and grey goatee and pointy ears. He wears a black cloak.

Krad and his minions 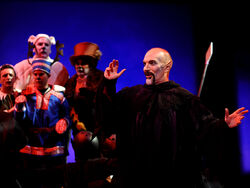 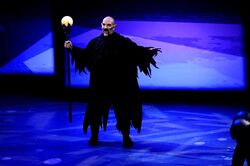 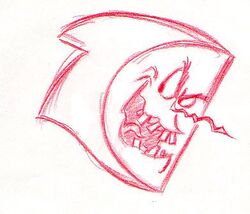 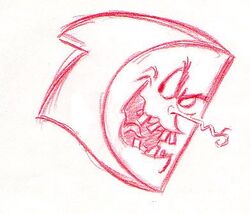 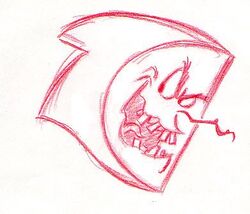 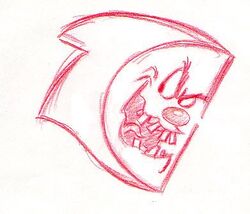 Add a photo to this gallery
Retrieved from "https://villains.fandom.com/wiki/Krad_(Christmas_is_Here_Again)?oldid=4103114"
Community content is available under CC-BY-SA unless otherwise noted.