Villains Wiki
Register
Don't have an account?
Sign In
Advertisement
in: Destroyer of Innocence, Terrorists, Destroyers,
and 43 more

The Kraken is a recurring antagonist in Disney's Pirates of the Caribbean franchise, serving as the secondary antagonist in Dead Man's Chest and a posthumous antagonist in At World’s End. It also serves as the main antagonist of the Mickey Mouse Season 3 episode "Wonders of the Deep", and an antagonist in other Disney media. It is the loyal servant/pet of Davy Jones.

The Kraken displays a feral and beastly nature. Relentless, it stalks its preys, persons marked with the black spot or Jones's foes until it finds and devours them.

Despite its dangerous nature, it is also shown to be loyal and obedient to Davy Jones to a fault and will carry out any order he gives it, even presumably a suicide. It also seems to have a vengeful and wrathful side to itself, destroying the Black Pearl because its cannons fired on its tentacles, even if it was not ordered to destroy the ship.

The Kraken existed for an unknown amount of time but was rumored to have been around for as long as there was water on Earth, though every culture had its own telling of the Kraken's legend.

It is unknown at what point the Kraken allied itself with Davy Jones, but it proved to be a loyal and deadly servant to him, and would continue to follow him, as Jones allowed it to destroy on command. Jones installed a massive capstan hammer aboard his ship, the Flying Dutchman, to summon the monster. It was also given the task of hunting down anyone Jones or the Crew of the Flying Dutchman gave the infamous Black Spot to, and would be attracted by anything related to them, including clothing, possessions, and allies.

Pirates of the Caribbean: Call of the Kraken

Completing the add-on will reward the player with a Kraken tattoo.

Over 100 years later, Davy Jones goes out in search of Captain Jack Sparrow to pay off a debt owed to him. He sends Bootstrap Bill Turner to curse Jack with the Black Spot so the Kraken may begin hunting him down.

During his attempted escape of the Kraken, Sparrow lost his hat. The Kraken was still drawn to it and violently dragged an innocent fishing boat into the ocean which happened to pick the hat up from the water.

Later, the Kraken attacked another ship (this is unseen), but killed most of the crew, destroyed the ship, and left some crew with their faces completely removed from the beast's suction-cupped tentacles.

After Will Turner escaped from aboard the Flying Dutchman, he found refuge aboard the merchant vessel Edinburgh Trader. However, Jones is enraged at Turner's escape and stealing of his key, so he summons the Kraken to attack the ship. At first, the crew on the ship believe they have hit a reef until the captain is plucked off the ship and violently dragged into the water. The crew then realizes that it is the Kraken that is attacking them and attempts to fight back with spears or whatever they can use. But all efforts are frutless as the Kraken plucks more sailors off the ship and thrashes them around almost playfully. After seemingly tired of playing with the crew.

The Kraken raises two massive tenticles out of the water and brings them down on the ship. Smashing it in two. It then lifts the two halves out of the water. Causing the remaining crew to slide into its gapping maw at the center. Turner, who was on a mast watching the whole thing looks on with horror. The Kraken then crushes the mast Turner was on, causing it to fall into the sea. As Turner was underwater, he turns around to see the massive creature before swimming back to the surface. Almost the entire crew that was on the ship was killed, the remaining survivors picked up by Davy Jones were quickly executed.

Later, when the Flying Dutchman fell behind in pursuing the Black Pearl, Davy Jones' crew summoned the Kraken again to finish it off. The Kraken slammed the ship to cause it to stop moving, then rose its tentacles out of the water to attack. However, Turner ordered the cannons to be fired, shooting the tentacles and causing the Kraken to recoil them in pain.

Enraged, the Kraken attacked the cannons so the crew could not shoot it again, then began attacking the crew and smashing parts of the ship. Pintel and Ragetti manage to cut off a tentacle, and the crew begins to hoist a net of gunpower barrels up higher to blow up and hurt the Kraken. However, the Kraken begins to overpower the crew until Sparrow returns to fire at the barrels and blow them up, burning the Kraken and causing it to momentarily retreat.

Though Sparrow ordered everyone to abandon ship, Elisabeth Swann handcuffed Jack to the mast, knowing that he was the one the Kraken was after, and if he died, the rest of them would be spared. Jack managed to free himself, but the Kraken rose up again and confronted Jack, It roared at Jack while spitting out his hat. Jack notices it and picked it up and placed it back on his head before bringing out his sword up and faces the Kraken before running forward in an attempt to stab at it in the mouth, but was quickly engulfed. The Kraken then wrapped its tenticles around the Black Pearl and dragged it down into the depths of the ocean, Jones, who watched the whole thing considered Jack's debt paid.

Despite Jones and the Kraken's success, Lord Cutler Beckett obtained Davy Jones' heart, able to control him. In his tyrannical conquest of using Jones and the East India Trading Company to take over the seas, he ordered Jones to betray and murder the Kraken, which Jones was forced to obey. Though it is unknown how the Kraken was killed, it is most often assumed it was beached or hunted.

Pirates of the Caribbean: At World's End

The Crew of the Black Pearl, a revived Captain Jack Sparrow, and Hector Barbossa come across the Kraken's corpse on the shore of the Black Sand Beach. Jack and Barbossa reflect on the beast's actions, but feel pity as it was the last or even only one of its kind, and now it was extinct forever, much like the Age of Pirates slowly coming to an end, and the once-plentiful amount of pirates and privateers was slowly dwindling down until they too would be extinct.

The Legend of Captain Jack Sparrow

In the now-defunct attraction at Disney's Hollywood Studios, guests got to relive the events of the film franchise through their own eyes, battling against many of the villains from the series including encountering Davy Jones and the Kraken.

Pirates of the Caribbean: Battle for the Sunken Treasure

The Kraken makes a brief appearance as a minor antagonist in this attraction.

The Kraken appears in Kingdom Hearts III as one of the final bosses in The Caribbean world even though the world's story is based on the third film. It gets summoned by Luxlord during the Maelstorm battle and would also assist Davy Jones in his boss battle too.

The Kraken appears in the episodes "The Heart of the Truest Believer" and "Dark Waters", summoned by Neal and Gold so they may steal its ink.

The Kraken appears as an enemy in Disney INFINITY.

A Kraken-themed attraction is available for purchase and construction in Disney Magic Kingdoms.

In the Season 3, episode 45 episode "Wonders of the Deep", Mickey Mose, Donald Duck, Goofy, and Professor Ludwig Von Drake journey in a submarine down to the bottom of the ocean.

However, an accident caused the Professor to accidentally be launched from the sub and eaten by a giant clam. As Mickey and Donald search for him in dive suits, they begin to be stalked by the Kraken.

When Gofy messes up and cuts off the pair's oxygen, they hallucinate that they are dancing and cuddling with mermaids, but when they come to, they realize they are actually in the tentacles of the Kraken, which is attacking the sub. It begins torturing and toying with Donald and Mickey before finally devouring them.

Inside the Kraken's stomach, the two mope until they find the clam that ate the Professor in there with them, and have Goofy shoot missiles and radar from the ship to damage the Kraken and knock it into a rock wall. A rock then drops on the monster, causing it to spit them out and have them escape.

Captain Jack Sparrow vs. the Kraken. 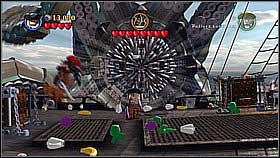 The Kraken in LEGO Pirates of the Caribbean: The Video Game. 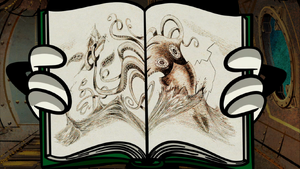 Illustration of the Kraken in Mickey Mouse. 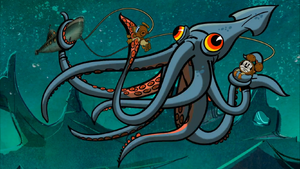 The Kraken in "Wonders of the Deep". 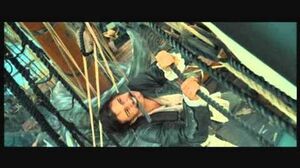 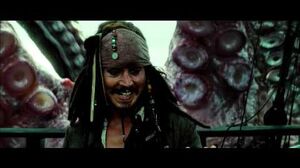 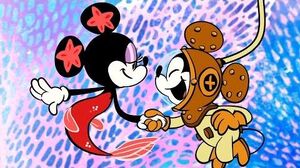 Wonders of the Deep A Mickey Mouse Cartoon Disney Shorts