Guardian of the Sisters of Fates

Tentacles
Ability to spray slime out of its mouth

Kill Kratos in order to prevent him from reaching the Sisters of Fate (failed).

The Kraken is a major antagonist in the video game God of War II. After Kratos accidentally kills the Last Spartan, the Kraken appears out of nowhere and tries to kill Kratos.

Its vocal sound effects were provided by Michael Edward Johnson.

According to Greek mythology, the Kraken is a giant sea monster that resembles a giant octopus-like monster.

After The Last Spartan told what happened to Sparta, and died, the Kraken appears out of nowhere and blocks Kratos' pathway toward the Temple of the Sisters of Fate. Instead of fighting it, Kratos screams toward the sky about how Zeus is a coward for destroying Sparta. When Kratos was being squeezed to death by the Kraken and nearly dies, Gaia grants Kratos the Rage of the Titans, so he could free himself from the Kraken's grasp. 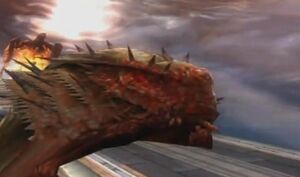 Kraken's death.
Add a photo to this gallery

Retrieved from "https://villains.fandom.com/wiki/Kraken_(God_of_War)?oldid=3419249"
Community content is available under CC-BY-SA unless otherwise noted.