Fulfilling wishes of their master Krampus.

Aid Krampus in his quest to take families who lost their Christmas spirit to Hell.

Krampus' Elves, also known as "Elves" and "Krampus' Helpers", are the secondary antagonists of the 2015 supernatural holiday-themed horror-comedy film Krampus.

They were portrayed by Mark Atkin and Seth Green, who also played Scott Evil in the Austin Powers films, along with other actors playing the Elves.

The Elves appear as small men with hooded robes with chains. They also wear mask with different expressions for each of them and some of them have horns just like their master has.

The Elves are wicked and evil beings who are willing to serve their master no matter what.

The Elves are first seen when Howard goes off to rescue Howie Jr and Beth. He sees them around the evil looking snowmen and the snowmen looking like Howie that they built But Howard is pulled back in by Tom, Sarah and Linda before they can get him.

The Elves then break into the House to rescue the Jack in the Box monster der Klown. They pull out the fire for Krampus and pull der Klown away from the house and they manage to capture Howard, Aunt Dorothy, and Howard and Linda's baby Daughter and they run off with them.

They later attack Max and Stevie in the snowplow when they fail to get it to work. The Elves capture Stevie and run off with her just before Krampus arrived to give Max's bauble. They are arrive with Krampus at his sleigh to take Stevie to the Underworld (Hell). They witness Max confront Krampus and plead with him to bring his family back. When Krampus creates the hole to the underworld, They bring Stevie up and drops her into it. The Elves then witness Krampus drop Max into the hole. 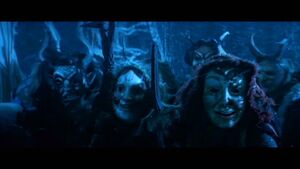 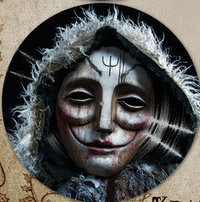 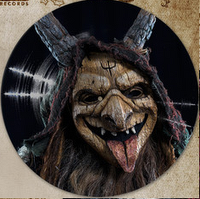