Demonic appetites and strengths (both for all members)
Expandable jaw and stretchy body for swallowing large prey (Der Klown only)
Sharp teeth, claws, and blades (Tik-Tok and Teddy Klaue only)
Short flight (Perchta only)
Coordination/teamwork (Nutcracker only)

Aid Krampus in his quest to take families who lost their Christmas spirit (succeeded).

Krampus' Toys are supporting antagonists of the 2015 horror comedy film Krampus. They are a gang of demonic living toys who serve Krampus to punish and take away those who have lost the Christmas spirit.

Near the beginning of the film, the toys arrive at the family's doorstep in a big bag, wrapped in Christmas packages. Thinking they were mailed from relatives, the Engel family take the presents and leave them upstairs in the attic.

Once the snowstorm sets in, Beth attempts to leave the house to check on her boyfriend, but is chased by Krampus before hiding under a parked truck. Krampus leaves a tiny jack-in-the-box beside the truck, which opens by itself and presumably attacks and kidnaps Beth.

Later that night, Jordan and Stevie go up to the attic when they hear Beth's voice from up there, where they discover the presents are torn apart and empty, appearing to have been opened from the inside. They are then attacked by Der Klown.

When Tom, Sarah, and Linda go upstairs to check on them, They discover to their horror that Der Klown has devoured Jordan, swallowing her head-first before slithering away. Linda attempts to shoot Der Klown, but she, Sarah, and Tom are attacked by the other toys. Sarah is attacked by Perchta the doll, Linda is attacked by Teddy Klaue, and Tom is attacked by Tik-Tok. Meanwhile, downstairs in the Kitchen, the gingerbread men Lumpy, Clumpy, and Dumpy attack Howard.

Linda, Sarah, and Tom manage to retaliate and save Stevie but the toys escape, Der Klown slithering into the heating ducts. Howard manages to kill the gingerbread monsters with the help from His dog Rosie. When the group gets back down stairs, Max attempts to use Rosie to scare Der Klown, sending her into the ducts, but the Jack in the Box eats the dog, followed by Der Klown and the other toys crashing through the ceiling into the living room.. They prepare to attack the family, But Aunt Dorothy manages to kill Tik-Tok, Teddy Klaue, and Perchta. She then attempts to shoot Der Klown, but before she can take the shot, Krampus's Elves break into the house and rescue Der Klown, dragging him away from the house along with Aunt Dorothy and the baby, while keeping the rest of the family at bay with their spears.

Once the rest of the family attempts to escape the house, Omi stays behind to confront Krampus head-on. She stands her ground, and Krampus opens up his bag, revealing a sharp-toothed Nutcracker, a smaller version of Der Klown, and several teddy bears, all of which leap out screaming, presumably capturing/killing Omi.

The toys are last seen at the very end before credits roll, screaming at the audience before leaping at the camera.

Like their master Krampus, the toys punish and kidnap those who have lost the Christmas Spirit, though they are much more energetic and psychotic in their methods than the more patient, stalking Krampus. They delight in frightening their victims with roars and screams before attacking with claws, teeth, and other weapons, stabbing and biting without restraint or mercy, even going so far as to attempt to kill people. They even have a sadistically humorous streak, as shown by Der Klown who daintily wipes its drooling maw with a hankerchief just after devouring Jordan. 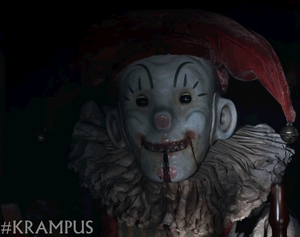 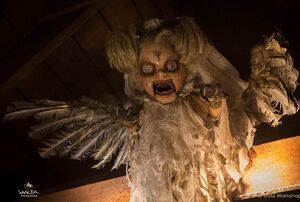 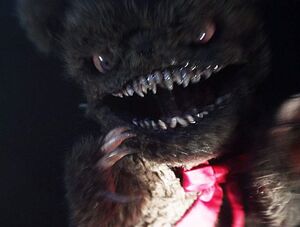 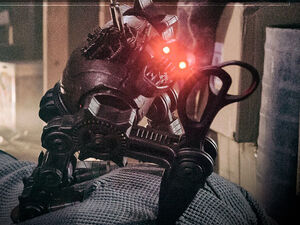 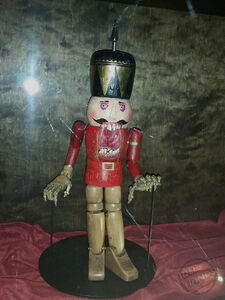 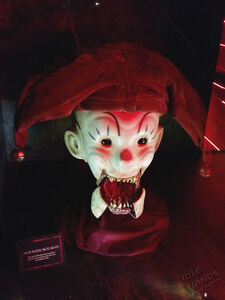 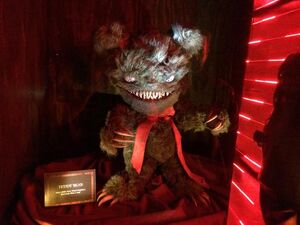 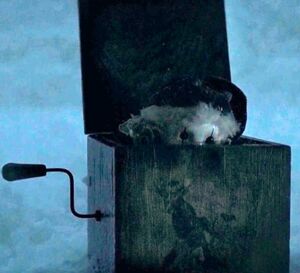 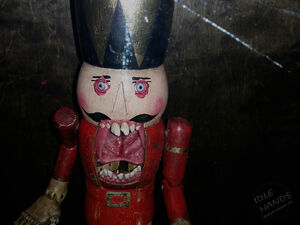