Punishing and tormenting many misbehaving children.

Torment naughty children for their disobedience and bad behaviors.

Krampus, also known as the Christmas Devil and the Christmas Demon, is a demonic accomplice of Saint Nicholas/Santa Claus who appears in various legends within most European countries, most notably Austria and Hungary. He was used as a scare-them-straight figure by children's parents as a means to frightening them into obeying them lest they become the next victims of Krampus.

The most common depiction of the Krampus is that it resembles something Devil-like (similar to The Devil in Abrahamic religions), goat-like (similar to the mythical demon Baphomet), or satyr-like (possibly similar to Pan, the Greek god of wilderness and rustic music) with more fur in his body. As a colleague of Saint Nick, Krampus is essentially the anti-Santa Claus in that he brings suffering and torture to naughty children whereas Santa brings gifts. Most versions of the Krampus depicts the Krampus almost as a Knight Templar character who would severely beat children into obedience, or, in some versions, outright kills the child. Krampus may even go as far as to kidnap the child and put them into a sack and take them back to his lair to devour them. Or, he simply takes them to the underworld. One of his main discipline tools includes birch sticks that he could use to swat children with.

It is customary to offer a Krampus schnapps referred to as a "Krampuslauf", a strong distilled fruit brandy. These runs may include Perchten, similarly wild pagan spirits of Germanic folklore and sometimes female in representation, although the Perchten are properly associated with the period between the winter solstice and January 6.

Europeans have been exchanging holiday greeting cards called "Krampuskarten" featuring Krampus since the 19th century. Sometimes introduced with "Gruß vom Krampus" ("Greetings from the Krampus"), the cards usually have funny and humorous rhymes and poems. Krampus is often featured looming menacingly over children. He is also shown as having one human foot and one cloven hoof. In some, Krampus has sexual overtones, as he is pictured pursuing buxom women. Over time, the representation of Krampus in the cards has changed; older versions have a more frightening Krampus, while modern versions have a cuter and more Cupid-like creature. Krampus has also adorned postcards and candy containers.

In Germany, there is a day called "Krampushaeht", or "Krampus Night", that would be celebrated on December 5, ironically on the same day as St. Nicholas Day. Nowadays, there are festivals and parades thrown for the Krampus, and many people dress up like him within most Alpine towns in events such as the Krampuslauf (translated in English as "Krampus Run").

According to the Alpine cultures, there were spirits called "Pektin" or "Pectin" (not to be confused with the structural molecule pectin). Some of these spirits are good and some of them are bad, and Krampus is most definitely one of the bad ones. 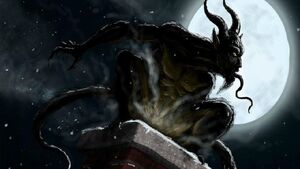 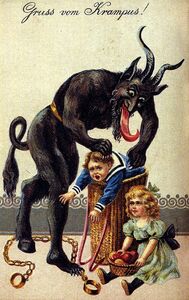 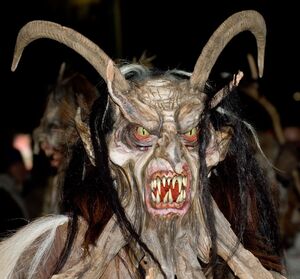 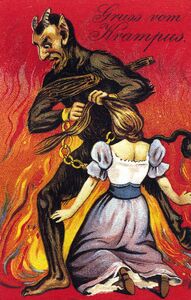 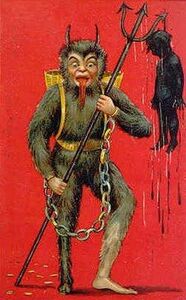 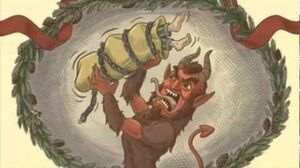 American Dad - The Story of Krampus 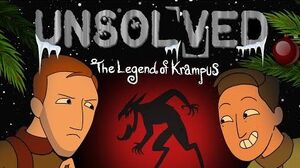 Unsolved The Legend of Krampus 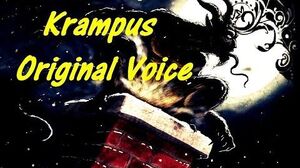