Take control of both Earth and Dimension X (failed).

Stop Utrom Shredder from Destroying the Multiverse (succeeded).
Destroy all incarnations of the Ninja Turtles and become a Member of the Kraang again.
Destroy the 2012 Universe (all failed).

Krang along with Shredder is one of the main antagonists of the 1987 Teenage Mutant Ninja Turtles series until season 9 and 10 where both are replaced by Lord Dregg.

He is an alien warlord from Dimension X who seeks to both conquer Earth and his home Dimension. He is also the partner of Shredder, whom he often argues and fights with. Truly he is from the dimension of the 2012 show where he was banished by his cousin, Kraang Subprime for his stupidity and because of his insane methods of conquering realms. He is also the central antagonist of the episode "Trans-Dimensional Turtles" in Season 4 and one of the two main antagonists (Alongside Shredder) of the Wanted: Bebop and Rocksteady arc in Season 5 of the 2012 TMNT series.

Before the series started, Krang was once a feared, powerful warlord from Dimension X, a place of continuous war. He controlled an army of Rock Soldiers, under the leadership of his right hand man, General Tragg. One day he was captured and was stripped of his body reducing him to a living brain. Krang (or what was left of him) was then banished from Dimension X, along with his mobile fortress, the Technodrome, to Earth, in hopes he would never return. However, during his stay on Earth, General Tragg continued the war against Dimension X natives, The Neutrinos.

Sometime before the Turtles and Splinter were mutated, Krang met the leader of the Foot Clan, Oroku Saki aka The Shredder, the two began an uneasy alliance. Krang allowed Shredder to access his advance technology in exchange for a new body, in which Krang himself designed. Despite this, Shredder did not live up to this deal as he was afraid that Krang would try to overthrow him. It wasn't until Shredder's countless failed attempts to kill Splinter and the Ninja Turtles that new had to create Krang's new body. When Krang's body was complete, he almost was successful in killing the Turtles and bringing his troops to Earth, but the Turtles foiled his plans and sent Krang, Shredder, and The Technodrome back to Dimension X, and from that point forward, Shredder had no choice but to follow Krang's orders.

Krang in the Archie comics was portrayed far more evil and dangerous than his 1987 version.

Krang appears in the IDW comics as a major villain.

Krang appeared as a cameo in the 2003 series. Krang was one of the main antagonists in the crossover special Turtles Forever, appearing with much of the cast of the 1987 show, crossing over with the 2003 Ninja Turtle series. He is portrayed as ineffectual and easily defeated, though the 2003 Shredder makes use of his Technodrome to try to destroy the Ninja Turtle multiverse. Krang uses his enlargement powers to try to fight 2003 Shredder and save the multiverse, but is quickly defeated.

A version of Krang called Kraang Prime appears as one of the main antagonists of the series and the leader of the Kraang. Krang would appear again in the 2012 Nickelodeon Teenage Mutant Ninja Turtles series. In the episode "Trans-Dimensional Turtles" he is the secondary antagonist (Shredder does not appear because his voice actor, James Avery, died several years prior.) In the special crossover, the 80s turtles summoned the modern turtles to their dimension to help them stop Krang, who had planted a bomb in the city.

Unfortunately, Kraang SubPrime hacks their dimension transporter and sends them to the Technodrome, much to Krang's displeasure. It is then revealed that Krang is actually Sub-Prime's cousin and that he was banished to the 80's dimension because Sub-Prime thought he was an idiot. After helping Sub-Prime fight the turtles, Krang is then beaten and re-banished by Sub-Prime after the turtles state that the dimensionizers were meant to destroy the dimensions that the Kraang were planning on mutating, angering Sub-Prime beyond belief.

He also appears as the overarching antagonist of the 2018 cartoon series Rise of TMNT. He was the one who gave Shredder his armor.

Krang is known for being a brilliant scientist, having designed countless weapons, including his well known android body. He is a cold, cunning, manipulative and somewhat a sadist, as he claims that he enjoys watching "people and animals suffer" In the Archie Comics he is known to be responsible for his massacre on the characters Wingnut and Screwloose homeworld Huanu, and destroying all life on a planet known as Hyrobl.

Despite his frail appearance, many other villains fear Krang, including Shredder, who denies this, Bebop, Rocksteady, and Baxter Stockman (before he crossed mutated into a humanoid fly) Krang is known to have several enemies other then the TMNT and Splinter, this includes Shreeka, a Dimension X criminal who is wanted in thirteen galaxies and was Krang's old partner in crime (and possibly an old girlfriend), Maligna the Malignoid queen, and Lord Dregg, an evil alien warlord and villain of the last two seasons of the series. Despite Shredder's obsession with the Turtles and Splinter, Krang doesn't see them as mortal enemies, but as minor setbacks who need to be destroyed. However, certain incarnations like his 1987 version, still hate them for foiling his schemes meaning he is simply better at not letting his temper get the best of him.

While many of his later incarnations are much more dangerous, Krang is fairly comedic during his debut during the 1987 series. While very sadistic, he is also arrogant which is part of the reason the Turtles foiled so many of his schemes. He is also less of a threat outside of his suit.

Krang was likely based on The Utroms, who unlike Krang, were a benevolent race of natural brain looking aliens. However, Krang is not an Utrom, in the episode Invasion of the Krangezoids, Krang cloned himself and while they appear to be brain like creatures at first, the cloning process allowed the cloned Krangs to "re-grow" their bodies as "Some lizards can re-grow their tails" it was here when the first (and only) time we get to see Krang's natural form, which were 10 to 12 foot tall hunched back lizard-like humanoids with Krang's "brain" as their head.

However when Krang was stripped from this form, he appears as large pink brain around the size of a basketball with large eyes and a wide mouth with sharp pointed teeth two long slimy tentacles, and a ridged forehead, to move around he designed a tall, powerful, bulky human-like android with many built in weapons including a chip where Krang and his body can grow to giant proportions, Krang himself would rest in the stomach controlling his body. When his body isn't in use, he uses a much smaller bipedal machine known as a "bubble walker" which is equipped with several weapons.

It is unknown why after Krang was stripped from his natural form, that he never tried to find a way to re-gain it, especially after he found out his clones were able to re-grow their bodies.

Whenever Krang speaks, he sometimes croaks like that of a lizard, possibly due to his reptile heritage. 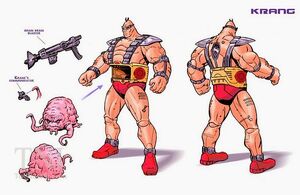 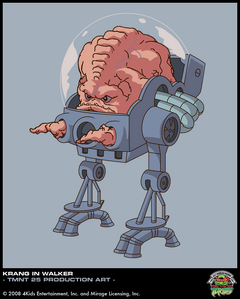 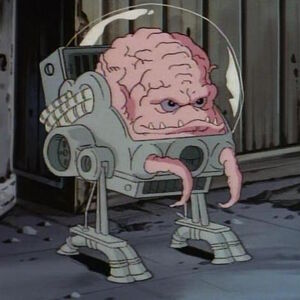 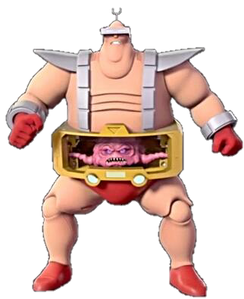 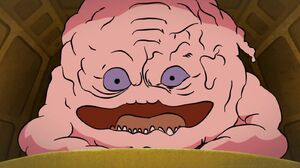 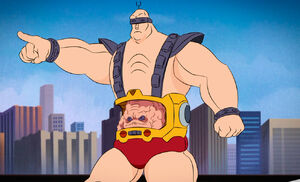 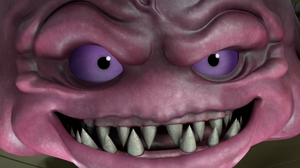 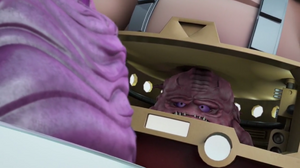 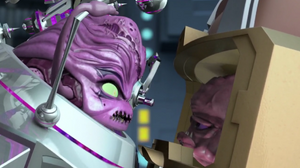 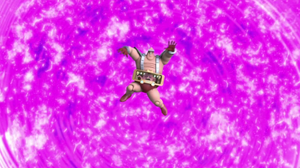 Krang in the Archie Comics