Krang (Out of the Shadows)

Robot Suit has Superhuman Strength
Durability
Can arm itself with highly advanced and powerful weapons on various parts of its body
Manipulation
High Level Fighting Skills
Controls of the Technodrome.

Wreaking destruction upon earth for fun (as Krang deliberately called the earth his toy and his destruction as playtime).

Use Shredder to complete his plans and then betray him (succeeded)

Kill the Turtles.
Use the Technodrome in order to tear the Earth apart for fun.
Conquer the entire universe for himself and to enslave all life (failed).

Krang is the main antagonist of the 2016 live-action sci-fi film Teenage Mutant Ninja Turtles: Out of the Shadows. He is an alien warlord from another dimension seeking to conquer the Earth. He had sent three components of a machine to the Earth's dimension that, when united, would open up a portal to his dimension, and has become the new master over the Shredder.

He was voiced by Brad Garrett, who also voiced Spike in Mighty Max and portrayed Joe Bulo in Fargo.

Krang is a childish alien, which is what makes him extremely dangerous. He refuses to share power or any of his own resources with any other individual and would manipulate them for his own advantage before betraying them by freezing them to be a part of his "toy chest". This is made more evident when Shredder, upon meeting him and activating the beacon, would want to share the power power the planet with the Krang throws a tantrum, and that he calls the Earth his toy.

Due to his intense childishness, Krang's sadism is extremely dangerous, as he treats all the planets he conquers as toys and razes them, calling the destruction as just merely playing with his toys, and that he calls the chamber he keeps all his frozen foes and allies as a toy chest. He also clearly enjoys slapping and humiliating Shredder upon first meeting him. Every deah and destruction he causes is just a game he loves playing for the sake of it.

Krang is also ungratefully treacherous. Even if the Shredder does end up deserving it considering he betrayed Stockman before meeting Krang, Shredder is still the only reason Krang was able to teleport to Earth's dimension and even have a chance to conquer it, yet betrays and freezes him, presumably killing him, all for the sake of not wanting to share power.

Commander Krang is a ruthless warlord who had a dangerous war machine called the Technodrome under his control. Intending to enslave all life in the universe, Krang has initiated the invasions of multiple planets throughout the cosmos, freezing up his foes to make them souvenirs in his huge collection because they thwarted him from razing their planets, having succeeded in playing with his toys (which is what he treats the conquered planets as) that lead to the planets breaking apart. Ages before the first film, Krang sent an Arc Capacitor to teleport the Technodrome to Earth, however, upon reaching the atmosphere of the planet, it separated into 3 fragments, one of them being a teleporter, which then went into the hands of the Foot Clan and Baxter Stockman, who use it to free Shredder from his life imprisonment, a plan that works.

Having researched about the Shredder and his backstory, the Krang hijacks the teleporter to transport the Shredder to him. Taking advantage of the situation, Krang takes a moment to humiliate him by slapping him with his mucous covered tentacle to show who is boss, before making him a deal the Shredder could resist. A partnership to take down Earth and bring it to its knees to dominate the planet and rule it. The Shredder predictably agrees to help Krang, to which Krang informs him about the 2 other parts of the arc capacitor and where they are hidden, to which Shredder warns the Turtles would stop him. Having anticipated this, Krang gives Shredder his cannister of mutagen to mutate some of his soldier to create a mutant army to stop them.

Shredder personally retrieves the first component from a museum in New York and sends Bebop and Rocksteady to retrieve the final one in Brazil, which they succeed. The arc capacitor is finally repaired thanks to Baxter Stockman, to which Shredder betrays him by forcing him to be on the Foot's facility in Tokyo, much to Stockman's resistance. With the Arc Capacitor repaired, the pieces of the Technodrome arrived to reassemble. Upon teleporting to Krang to assist him in taking over the planet and share power, Krang immediately betrays Shredder as he views Earth as only his toy to share, freezing the supervillain when Shredder attempts to kill Krang for his betrayal and locking him away in his collection along with the rest of the allies he betrayed and frozen and other defeated foes.

As Krang prepares to fire the weapons, the Turtles enter the rebuilding Technodrome to face off Krang. As they await to examine the robot suit Krang uses, Krang reveals himself, facing everyone. As he continues fighting the Turtles, the Technodrome nears completion and with this, Krang has prepared his cannon to obliterate all of New York city and destroy it, before moving on to raze the rest of the planet. Mikey then eventually tries to remove the beacon to sabotage the completion and send the Technodrome back into Dimension X, Krang attempts to stop Mikey but unfortunately, Donnie uses an EMP pulse to shut down his suit and knock him cold. Mikey then removes the beacon and the Technodrome is sent back to Dimension X, dragging Krang with him who vows revenge, claiming he will return thousand times more powerful. 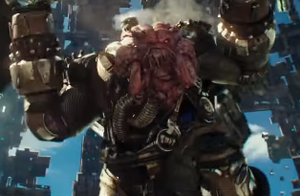 Krang and Shredder decide to work together

The original design for Krang's android.

Krang reveals himself to the turtles

Krang and Shredder on the Technodrome

Krang fires at Michelangelo to stop him from reaching the Technodrome's beacon. 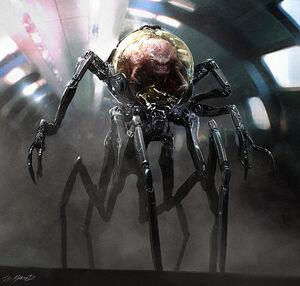 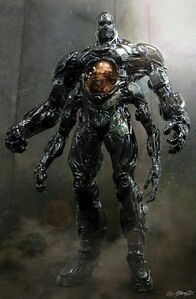 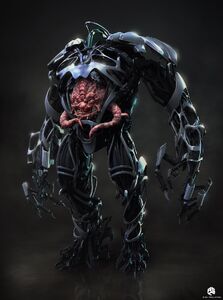 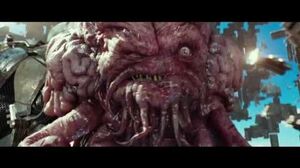 TMNT Out of The Shadows Krang Freezes Shredder HD 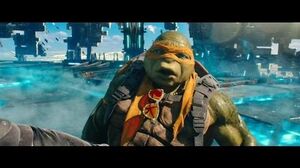 TMNT Out of The Shadows Turtles vs Krang HD