The City of Lost Children

Gain the ability to dream.

Krank is the main antagonist of the 1995 French-German-Spanish steampunk/fantasy film The City of Lost Children.

He was portrayed by the late Daniel Emilfork.

Krank is one of a group of artificial humans, along with Mademoiselle Bismuth, Uncle Irvin and six identical clones, all created by the Diver in an effort to have a family of his own. Krank himself was said to have been the "masterpiece" of their creator, and was made to be the most intelligent man in the world.

However, the method used in creating them was flawed, and as a result, all of them had some manner of defect. Bismuth was afflicted with dwarfism, the six clones had sleeping sickness and Irvin, a brain inside a fish tank, was plagued with migraines.

Meanwhile, Krank was unable to dream. Over time, this caused him to become more and more deranged, as well as age prematurely. Eventually, Krank rebelled against his creator and, together with Bismuth, threw the Diver from the oil rig where they all lived.

Some time later, in an effort to gain the ability to dream, Krank employs the help from a biolmechanical cult, which begins kidnapping children from a nearby port city and delivering them to his rig. The children are placed in a machine where Krank can share in their dreams, in order to steal them. But to his frustration, the children only provide him with nightmares.

The City of Lost Children

Among the kidnapped children is Denree, the adopted younger brother of One, a carnival strongman and former whaler. He sets out to rescue his brother, eventually teaming up with a young girl named Miette, a member of a thieves guild made up of orphaned children, lead by an elderly pair of conjoined twins known as The Octopus.

Uncle Irvin, disgusted with Krank and his methods, releases a psychic message picked up by Miette, as well as partially restoring the memories of the Diver, now an amnesiac living below the harbour.

The Diver, Miette and One all finally converge on the rig; the Diver to take revenge and destroy it and the duo to rescue Denree.

Later, Miette is forced to enter the machine used by Krank in order to release Denree. Inside the dream world, Miette meets Krank and convinces him to replace Denree as the source of the dream; Krank fears a trap but plays along, believing himself to be in control.

Miette then uses her imagination to control the dream, first by turning Krank into a child, and then creating an infinite loop of Krank being placed in the machine. Krank finally wakes up screaming in terror, before collapsing, his mind destroyed.

Krank is shown as an unstable and deranged man, leaping between calm, collected and sardonic, to wild, sometimes violent emotional outbursts and tantrums.

He admits not knowing anything about feelings, and is puzzled about why his twisted attempts at amusing and entertaining the children he has stolen only serves to frighten them.

Krank also shows no remorse or take any responsibility for his actions, and when Irvin calls Krank a monster, he angrily claims the Diver is responsible and insists on his own innocence. 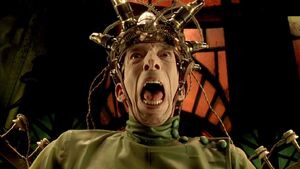 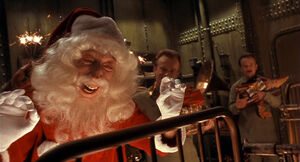 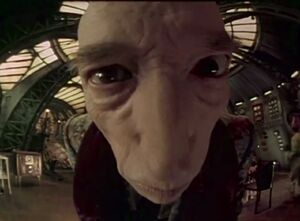 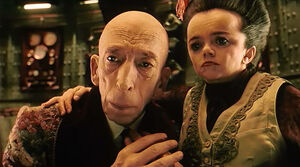 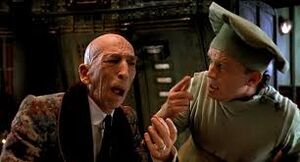 Krank crying.
Add a photo to this gallery

Retrieved from "https://villains.fandom.com/wiki/Krank_(The_City_of_Lost_Children)?oldid=3515394"
Community content is available under CC-BY-SA unless otherwise noted.