Gain the powers of the Tablet of Order and Chaos

Sergei Kravenoff, or better known as Kraven the Hunter or simply Kraven, is an antagonist from the 2010 Marvel video game Spider-Man: Shattered Dimensions. He is a poacher and hunter who seeks to prove himself as the most powerful man by killing Spider-Man. He is from the Amazing dimension.

He was voiced by Jim Cummings, who also voiced Goblin in the same game.

After the Tablet of Order and Chaos is broken in a battle between Spider-Man and Mysterio, the pieces are scattered across dimensions, with Kraven obtaining one. In the Amazing Universe, Spider-Man's Spider-Sense leads him to the booby-trapped trophy room, but he is knocked out by a gas. Kraven, not wanting to be unsporting, brings Spider-Man to his hideout in the ancient ruins of a temple in the jungle.

He waits until Spider-Man wakes up, and then issues him a challenge: if Spider-Man can survive his gauntlet, which includes traps, hazards, and combat against his disciples, then he will give the Fragment as a reward. Spider-Man agrees, and pursues Kraven through the ruins while avoiding traps and fighting off Kraven's henchmen.

Kraven acquires a sniper rifle, and begins shooting Spider-Man's webs, grounding him. Spider-Man takes advantage of the shots to trick Kraven into shooting down trees, so he can cross the gorge without having to web swing. Kraven then lures Spider-Man into a cage ring, where he pits him against bigger henchmen. When Spider-Man defeats them, Kraven steps in to fight himself.

Kraven lunges at Spider-Man, and Spider-Man takes advantage of his missed swings to deal his own damage. Kraven rigs the floor to eject spikes periodically, though Spider-Man can avoid them by swinging upwards. When Kraven leaps up to attack, Spider-Man and kick him off of his perch and back to the ground. Kraven then moves in closer, swinging his kukuri. Spider-Man dodges, and punches Kraven. Kraven incorporates more leaps into his attack patterns as well as begins throwing his kukuri, but Spider-Man overpowers him and kicks him out of the cage, so his disciples flee.

Kraven, feeling disgraced, dishonored, and wrathful, turns to using the Fragment. The piece gives him increased strength and leaping, but most notably, blinding speeds. Kraven decides to toy with Spider-Man before finishing him off, climbing to the top of the temple to wait for Spider-Man. Spider-Man fights the remaining henchmen and navigates a series of pulley-based stone elevators before reaching the top.

Kraven, now knowing he has no one to prove himself to, decides to let loose. His speed makes it difficult for Spider-Man to damage or even track him, only able to get hits in when he charges an attack or misses a lunge. He attacks with his kukuri and smoke bombs, jumps between pillars, and dodges quickly, but Spider-Man overpowers him. Kraven leaps to a ledge to try and recover, but Spider-Man swings up and kicks him into a wall, knocking him unconscious and allowing him to recover the Fragment.

Kraven is brash, arrogant, and prideful. He takes great pride in his skill as a hunter and combatant, as well as his teaching ability. When this pride is hurt, he feels extremely dishonored and grows angry and wrathful. He is relentless in his attacks, not believing in holding back. Despite this, he is a man of honor and sportsmanship, and allows his opponents a fair fight, even if his passion and rage can sometimes cloud his sense of nobility. 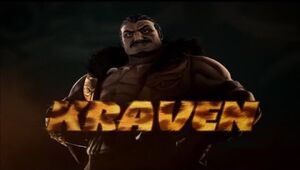 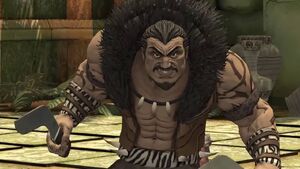 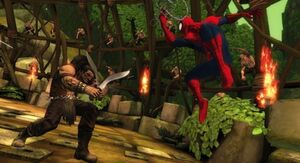 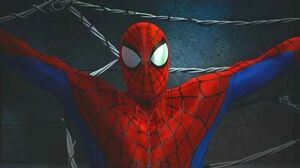 Retrieved from "https://villains.fandom.com/wiki/Kraven_(Spider-Man:_Shattered_Dimensions)?oldid=4189919"
Community content is available under CC-BY-SA unless otherwise noted.