Kill all three vampire elders and seize the position of leadership himself.

Have Selene be his bride.
Kill Michael Corvin.
Kill Marcus Corvinus (all failed).

Kraven is the supporting antagonist in the 2003 film Underworld, and a minor antagonist in Underworld: Evolution. He is the Vampire regent of the Old World Coven and the secret ally of Lucian.

He is portrayed by Irish actor Shane Brolly, and voiced by Trevor Devall in Underworld: Endless War.

In the 21st Century, Kraven begins his move towards gaining complete power over the Vampires. Taking advantage of the change of power between the Elders, Kraven plans to assassinate both Marcus Corvinus and Viktor as they lay slumbering, while Amelia would be killed by Lycans under orders from Lucian. Kraven's plans begin to go awry when Selene becomes suspicious of the alleged death of Lucian, and begins to look into the affair.

Initially, Selene believes the same as all the other Vampires, that Kraven killed Lucian and burned his fortress to the ground. However, Kraven has an ill-timed slip of the tongue while speaking with her, referring to Lucian in the present tense, though the Lycan is supposed to have died 600 years before. Selene begins to dig into the Vampires' history, and discovers a drawing of Lucian. She then realizes that she had seen Lucian earlier that very night. Armed with this knowledge, Selene awakens the slumbering Vampire Elder Viktor a century before his set Awakening time, and begs him for help. Viktor is irritated by his awakening and blasts Kraven for losing control of the coven and of Selene, referring to the coven as "weak" and "decadent".

Upon learning that Selene may be in a relationship with a Lycan named Michael Corvin, Viktor dismisses Kraven, then orders Selene to be judged by the Vampire Council and Amelia, claiming that she has been "tainted by an animal". Viktor refuses to believe Selene over Kraven, and so unknowingly gives Kraven the opportunity to finish carrying out his plans. Enraged by Viktor's awakening and Selene's continuous rejection of him, Kraven vents to his servant, Erika. He decides that Erika can be used to fulfill his plot, but instead ends up drinking her blood after she removes her shirt in front of him.

Much to Erika's dismay, Kraven dumps her on his couch and leaves when he learns that Selene has returned to the mansion. Kraven intercepts Selene and again attempts to force a monogamous relationship onto her, which leads Selene to declare "There is no us!" and to punch Kraven, knocking him to the floor. After Selene is condemned to be judged by the Council, Kraven personally takes her to her room, where she is locked inside, unable to escape. Kraven comments to one of his men not to let Selene leave the room, referring to her as his "future queen". Erika hears this and becomes enraged that Kraven has again chosen Selene over her, despite their earlier tryst.

To secure her place by Kraven's side, Erika turns out the power to the mansion and frees Selene, with the hopes that Selene will never return and that Kraven will then choose her instead. Erika then lies to Kraven, telling him that Selene ran off to be with Michael. Kraven has his personal guards, led by Soren, sent to pick up Amelia and escort her back to the mansion. Unbeknowst to Viktor or anybody else, Kraven tips off the Lycans to Amelia's whereabouts and orders his men not to defend her and the Council as they're attacked. By the time the other Death Dealers reach the conclusion that something has gone wrong, Amelia is already dead. Kraven's next plans are to kill Viktor and Marcus. Unfortunately for both Kraven and Erika, Selene returns to Ordoghaz with proof of Kraven's conspiracy with Lucian.

A wounded Lycan, Singe, is forced to tell Viktor everything he knows about the Lycans' plans and Kraven's alliance with them. Singe tells Viktor that the Lycans want to use Michael Corvin's blood to make Lucian a Hybrid. Viktor does not believe this, exclaiming that Lucian is dead, to which Singe replies, "According to whom?". Viktor and Selene then look to where Kraven was standing, only to see that he has fled the mansion, fearful of Viktor's wrath. On his way out of Ordoghaz, Kraven tracks down Erika, and asks her to obtain the Silver Nitrate gun for him. Erika does this, and attempts to get into the car with Kraven, but Kraven shoves her out the door and drives off. Kraven drives to the Lycan den, where he confronts Lucian about everything that's gone wrong at the Vampire mansion. Lucian looks on Kraven with disgust, and announces that Kraven has messed everything up and that he now must fix Kraven's mistakes. Unhappy with Lucian's chiding of him, Kraven pulls out the Silver Nitrate gun and shoots Lucian once.

As Lucian falls to the floor, Kraven flees the room, searching for a way to escape the lair. Kraven rushes to the exit, but gets there just in time to see Viktor approaching the Lycan den. Realizing he can't get out that way, he begins to wander the lair, alternatively trying to find a way out and hiding from the Death Dealers. By accident, Selene and Michael stumble into the room where Kraven is hiding. Overcome with jealousy, Kraven shoots Michael several times with the Silver Nitrate gun. He then tells Selene the truth about how her family really died, and about the death of Sonja, the Vampire daughter of Viktor, whose death started the war between the Lycans and Vampires.

Kraven uses this to attempt to convince Selene to come with him and to be his mate, but she again refuses, looking down sadly at Michael, whose dying body lays in her arms. Kraven is suddenly stabbed by Lucian, who is still alive, though just barely. This gives Selene the opportunity to bite Michael, infecting him with the Vampire virus, and making him a Hybrid. Kraven shoots and kills Lucian, unaware of what Selene is doing. He starts to chide her, asking her what she is doing, but Viktor arrives and Kraven is forced to flee the room. Kraven remains in the Lycan den, not far from where he left Selene and Michael. Hiding behind a pillar, Kraven sees Michael become a Hybrid, and watches as Selene kills Viktor. Once Viktor is dead, he returns to the mansion, intending to kill Marcus and establish himself as ruler of the Covens.

Shortly after watching Viktor's death, Kraven returns to Ordoghaz with the few bodyguards he has left in his one last bid to seize power. He and his men rush to the Elders Chamber and pull Marcus' coffin from the floor. Much to Kraven's surprise, Marcus is not in the coffin, and it appears as though he tore his way out. Kraven then hears pounding from beneath the floor of the room. Marcus, now a Hybrid from accidentally ingesting the blood of the dead Lycan Singe, rises through the floor and kills Kraven's men in short order.

Kraven shoots at him, but Marcus uses his wing talons to pin him to the wall. He blasts Kraven for his treachery, then bites him and drinks his blood. From Kraven's blood, Marcus learns the truth of how Selene's family died, and that Viktor and Amelia are dead. Marcus stops before Kraven dies of blood loss, but he ignores Kraven's requests to be of assistance to him. Instead, he cuts off Kraven's head with his wing talons, killing him, and continues his search for Selene and Michael Corvine.

Kraven betrays Lucian, preparing to shoot in the back. 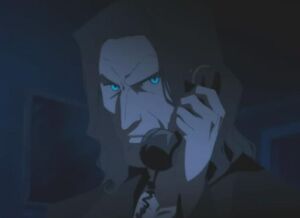