Kraven the Hunter
The Hunter
Spider-Man

Member of the Sinister Six (occasionally)

Sergei Kravenoff, better known as Kraven the Hunter, is a villain from Marvel Comics, most commonly serving as an enemy to Spider-Man. He was born in Russia, and lived in Africa as a big game hunter. He was known to be able to take down any prey with only his bare hands. He became superhuman after he drank a witch doctor's potion, which granted him enhanced strength, reflexes, and stamina. He now had enough power to bring down a charging elephant, wrestle a gorilla, or run as fast as a cheetah. He also used various weaponry, including knives, bolas, whips, spears, and dart-guns.

When Kraven heard about Spider-Man via his half-brother, the Chameleon, he decided that Spidey would be his next prey. After several defeats, Kraven joined the team of supervillains called the Sinister Six to attack Spider-Man.

Later on in his life, when Kraven was reaching old age, he decided to complete the greatest hunt of his career before dying. He succeeded in trapping and shooting Spider-Man with a tranquilizer, then burying him. Kraven took up the identity of Spider-Man for awhile, until the real Spidey broke free from his coffin and attacked Kraven with a vengeance. Kraven did not resist, knowing that he had finally defeated his lifelong enemy, and after the two of them took down the feral supervillain Vermin, Kraven eventually killed himself.

In a Spider-Man/X-Men comics crossover, it was revealed that Kraven had at one point made a deal with Mr. Sinister to retrieve DNA samples from the original members of the X-Men. After Kraven's death, Sinister created a new super-mutant with the combined powers of those X-men and the Hunter himself. Xraven was eventually defeated by the X-Men and Spider-Man when they persuaded him to turn on Sinister.

Kraven was succeeded by his son Vladamir, who took on the name of the Grim Hunter, but he was killed by Kaine. His half-brother Aloysha, (the son of Kraven and a mutant woman) then took on the title of Kraven the Hunter, and joined Venom's Sinister Six.

Ana Kravenoff, Sergei's daughter, recently took on her father's legacy and hunted down Spider-Man in revenge for her father's death.

Both Sergei and Vladimir were resurrected in a ceremony by Aloysha, Ana, and Sergei's wife Sasha. This act required the sacrifice of Julia Carpenter, the third Spider-Woman. Kraven has since taken charge of his family of hunters, and has battled Spider-Man and the Black Panther. However, the revival had twisted his mind, and he killed his wife and Vladimir, who had been revived as a lion-like beast, in a test to see if they were worthy Kravenoffs. His daughter Ana, just as ruthless as he, pledged herself to her father as an apprentice, and they have since been terrorizing Spider-Man.

In truth, Sergei had returned to the Savage Land, eventually learning that his curse of immortality had not been broken.However, Sergei wanted more, and hunted the New Men of the High Evolutionary to draw him out and force him to create 87 clones. Upon discovering what Kraven was doing, Ana left her father out of disgust and renounced the Kravinoff name, but Sergei dismissed her and took to raising and training his new "sons," who grew at an accelerated rate. Once he deemed them ready, Sergei sent them out into the world and tasked them with taking the final step to becoming men. While his "sons" did that, Kraven rebuilt his fortunes and reclaimed the territories he lost after his death. When he recalled his sons to claim their birthright, he was shocked to see that only one returned and revealed he had hunted and killed his brothers, deeming them weak and disgraceful. At first Kraven was upset, but he proclaimed how proud he was and sought to celebrate this victory, only for him to refuse as he wished to kill Spider-Man and claim his kingdom at that time. Sergei took his son to Africa and showed him his kingdom, once lush and green and now desolate and filled with the corpses of animals hunted by rich men who have no real claim to the hunt. He decided to show his son his intended vengeance for this at a dinner where it was revealed that he had set up a Grand Hunt sponsored by Arcadeand his company Arcade Industries. This Great Hunt sends the various rich folk after various animal-themed supervillains captured by Taskmaster and Black Ant. As he explained to his son, the villains took up the name and look of the various animals, but did nothing to honor their soul as they only sought their power, majesty and fear they inspire. He sought to make them honor the souls of the animals they become by forcing them to survive being hunted.

As the hunt raged between the Kraven-Bots and the various villains, Kraven made his true motive clear—to once more force Spider-Man to kill him and free him from his dreaded curse. When Spider-Man was overwhelmed by clones of Vermin, Kraven drove them off and had the badly-injured Spider-Man jailed with Curt Connors, who was recently captured to rescue his son Billy. Knowing the only way to escape was to free The Lizard from its pacifism, he forced Spider-Man to "kill" Curt. When Spider-Man was freed, he was hit with guilt upon seeing the bodies of various guards apparently killed by the Lizard's escape. Kraven confronted Spider-Man and once more in an effort to force him to abandon his ideals of not killing and unleash his inner spider, pushing him to the brink. However, Spider-Man realized something was wrong with the guards and that Kraven killed them to frame the Lizard and guilt Spider-Man into abandoning his heroic ways and become the hunter he should be. Instead, Spider-Man forces Kraven to watch as the Lizard saves Billy and the Black Cat from Kraven's Son, telling him that their humanity and desire to protect people makes them stronger. At that, Kraven understood that he was the beast he had been seeking to kill all along. He released the prisoners from their holds, allowing them to live once more and sends Spider-Man off to protect Mary Jane. As he does, he dons a copy of Spider-Man's black costume to become the Spider once more, conning his son into killing him by strangulation, something he doesn't realize until he sees the real Spider-Man swing off.

Kraven the Hunter is gonna be starring in an upcoming film based on Kraven's Last Hunt set in Sony's Universe of Marvel Characters. He will be portrayed by Aaron Taylor-Johnson, who also played William Rollins in Chatroom, Quicksilver in Avengers: Age of Ultron and Ray Marcus in Nocturnal Animals.

Kraven is the first boss in the video game. He captures Spider-Man and takes him to a remote jungle where he had many traps and minions waiting. After being humiliated by Spider-Man in defeat, Kraven used his piece of the Tablet of Order and Chaos to give him super-speed, which he has in the final battle.

He was rumored for the role of the main antagonist, despite being one of the rumored members of the Sinister Six (along with Green Goblin, Rhino, Vulture, Doctor Octopus and Mysterio). However, production of the game was cancelled. 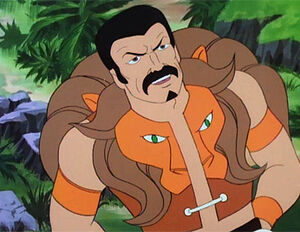 Kraven the Hunter in Spider-Man and His Amazing Friends. 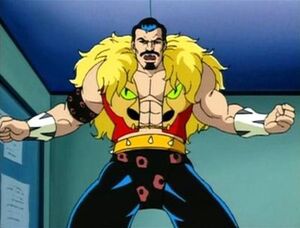 Kraven the Hunter in Spider-Man: The Animated Series. 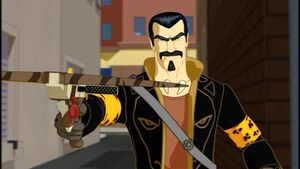 Kraven the Hunter in Spider-Man: The New Animated Series. 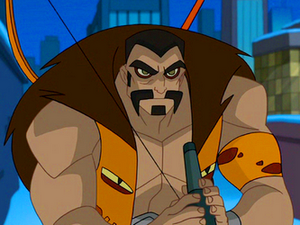 Kraven the Hunter in The Spectacular Spider-Man cartoon (before mutation). 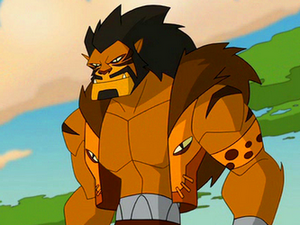 Kraven the Hunter in The Spectacular Spider-Man cartoon (after mutation). 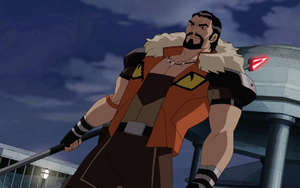 Kraven the Hunter in the Ultimate Spider-Man cartoon. 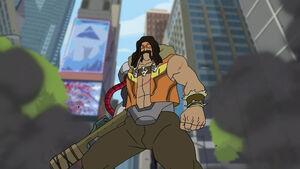 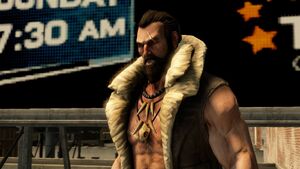 Kraven the Hunter in The Amazing Spider-Man 2: The Video Game. 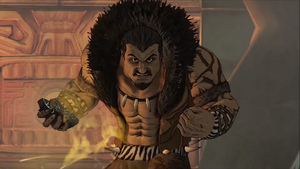 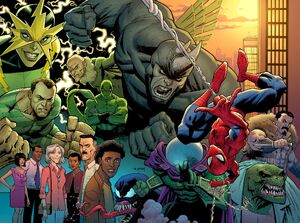 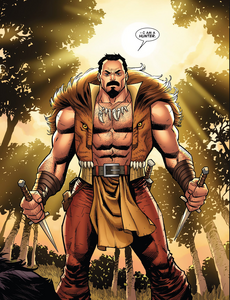 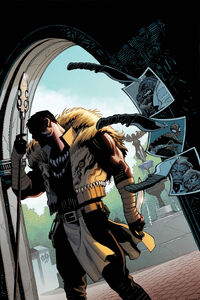 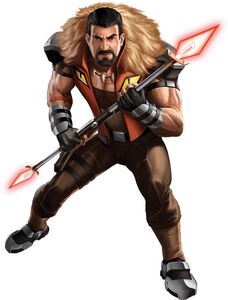 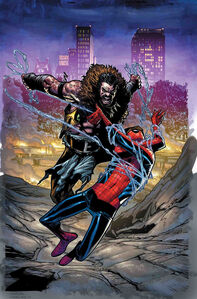 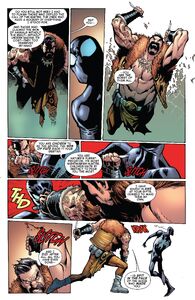 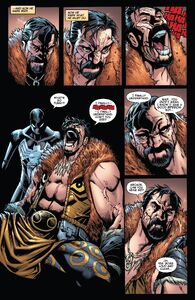 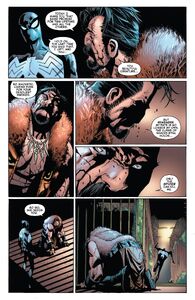 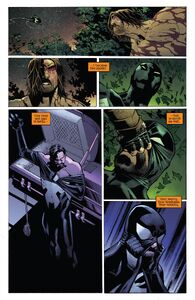 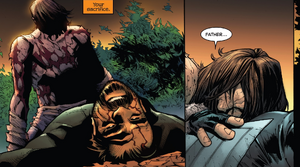 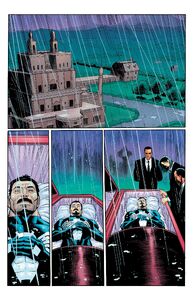 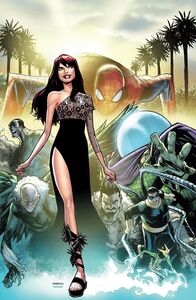 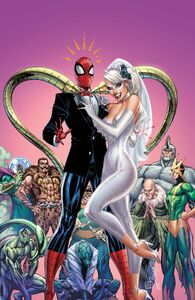 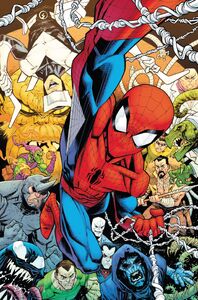 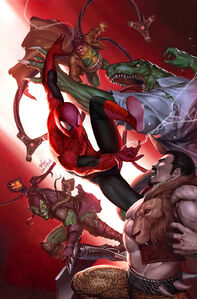 Retrieved from "https://villains.fandom.com/wiki/Kraven_the_Hunter?oldid=4355354"
Community content is available under CC-BY-SA unless otherwise noted.