Governor and Administrator of Promepolis

Chief director of the Foresight Foundation

Doing experiments on the Burnish.

Imprisoning and sucking Burnish hostages with the warp drive.
Threatening to imprison anyone who dare to expose his heinous deeds.

Escape from Earth along with a select amount of people using a warp drive powered by Promare while leaving everyone else to die from the rising magma.

Kill Galo and Lio (all failed).

Kray Foresight is the main antagonist of the 2019 Studio Trigger film Promare. He is the ruthless Burnish administrator of Promepolis and chief director of the Foresight Foundation. He successfully developed and invented materials that can put out Burnish fires. Galo looks up to him, hence being pulled from a fire by Kray when he was young.

He was voiced by Masato Sakai in the Japanese version, and Crispin Freeman in the English dubbed version.

Not much is known about Kray in the past, but he was known for developing technology that could resist and extinguish fire of the Burnish people, which became known in the public eye when Earth suffered the Great World Blaze, where fires from mass spontaneous human combustions killed many non-Burnish and caused various acts of discrimination. As a college student, he retrieved Galo Thymos out of a nearby fire and gained publicity afterwards. Because of that, Galo was motivated to become a firefighter.

At some point, while cooperating with Deus Prometh, the duo had a disagreement regarding how to proceed with the immigration plan. Deus found Kray's methods to be immoral and to only speed up the Earth's destruction. This resulted in Kray murdering Dr. Prometh and stealing his findings. Kray began to continuously research and capture the Burnish people by founding Burning Rescue, Freeze Force and the Foresight Foundation. This culminated in the foundation of the city of Promepolis, which Kray leads as Governor due to his past success.

Kray was first seen congratulating Galo, a rookie of Burning Rescue, for handing over the leader of the Mad Burnish group, Lio Fotia, to Freeze Force. Lio soon orchestrates a mass breakout while detained at a prison for Burnish and retreats with the refugees to a frozen lake, where they are discovered by Galo. After being incapacitated, Galo witnesses him attempt to revive a mortally injured Burnish woman using a CPR-like kiss. Lio reveals to Galo that Kray is capturing Burnish to further his evil plans, resulting in conflicted feelings within Galo.

Galo confronts Kray, who informs him that the Earth will soon be destroyed by an uncontrollable rise of magma from the Earth's core. He has also discovered that the abilities of the Burnish can be used to create a warp drive through the promatech engine, which he intends to use to flee Earth with a select portion of humanity, one of which being Aina Ardebit. When Galo opposes the idea, Kray resorts to assaulting and imprisoning him. Freeze Force soon tracks the remaining Burnish, capturing all but Lio. In vengeance for his brethren, Lio returns to Promepolis to confront Kray, though Galo intervenes and retreats with Lio to the frozen lake thanks to Aina's assistance.

Lio accidentally uses his Burnish powers to melt the frozen lake, revealing a laboratory ran by an AI projection of Deus Prometh. He explains that the Burnish are able to communicate with the Promare, interdimensional flame beings that reside in Earth's core; the surging magma is caused by inflicting pain towards them, and Kray's experiments on the Burnish are making it worse. Galo and Lio afterwards return to Promepolis for one final confrontation.

In order to stop Kray's plans, Prometh gives both Galo and Lio a Promare-powered mech named Deus X Machina. After this, both Galo and Lio attempt to destroy Kray's plans once and for all while the latter tries to evacuate from Earth. When one of the scientists asks Kray to wait for her sister, this results in him threatening her with guards.

Kray fights them with his own mech and orders his minions to set the warp drive by maximum while uncaring that the people in Earth die because of him. When his warp drive gets destroyed by Heris in retaliation, Kray then reveals his own true nature by Galo that he was in fact the cause of Galo's house fire, only running into him after. Furthermore, the reason why he motivated Galo into becoming a firefighter was so that he could eventually leave Galo to die. Naturally, this reveals him to also be Burnish. After flinging Galo off the two mechas on the Parnassus ship, he attempts to drain Lio to power the warp drives. Though this nearly kills the young man, Galo arrives, punching Kray and reviving Lio using a Burnish CPR kiss.

When Galo and Lio combine the drive and their mech to protect life on Earth while allowing the Promare to envelop the surface, the Promare vanish completely whereas the remaining Burnish become normal humans, leaving him and his foundation's plan in vain. According to artwork from the memorial book, Kray was finally arrested at the end of the day as he's depicted in jail eating pizza.

At first glance, Kray is that of a soft-spoken individual who governs the city of Promepolis. His face can be seen throughout the city, proclaiming himself a hero. Kray's association with Galo began this belief, implying it to have even given him his current position as administrator. Furthermore, in the Japanese dub, his voice is of a quieter tone, befitting of this persona.

However, Kray's benevolent traits were soon revealed to be a complete façade due to his several immoral experiments involving the Burnish having their powers sucked by the warp drive to the point of death. Kray claims that he did this because the world will end soon thanks to the rising magma levels and is trying to evacuate the 10,000 people to another planet so that they could repopulate while leaving everyone else to die. Unsurprisingly, Kray doesn't do this out of good will, as he seeks to slake his god complex. Because of this, Galo suggested that Kray travel to the Earth's core and fix the problems. Kray then proceeds to threaten Galo, punch him in the stomach, and throw him in prison. He later accuses the young man of being a terrorist.

Kray despised the fact that the Burnish wanted to exist peacefully, to where Kray arrested a Burnish man who works as a pizza maker and left him to be drained by his goons. The governor then has a sanctuary Lio established for the Burnish refugees to be attacked with Lio the only escapee. He later captures him to fuel the promatech engine. Fortunately however, he escapes from harms way thanks to Galo. After lighting a nearby building ablaze, Kray retrieves Galo in front of the small population as a way of gaining good publicity. His experiments only made things worse as the Promare had to be in pain to cause the magma level to surge, a decision Dr. Prometh questioned the morality of.

All in all, contrary to his soft-spoken and gentle persona, Kray is actually a ruthless and easily angered tyrant who desires nothing more but to be seen as a savior and hero by humanity, and to this end is willing to do whatever and sacrifice whoever he believes necessary to achieve his goals. 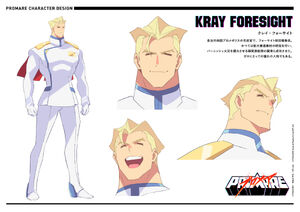 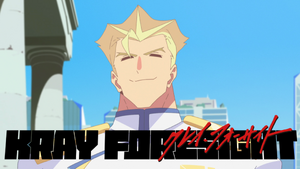 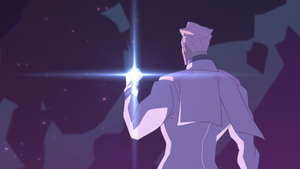 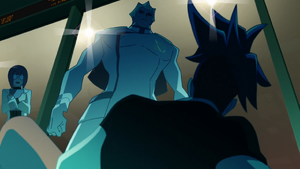 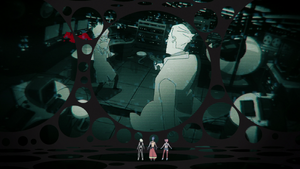 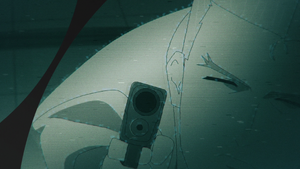 Kray about to shoot the camera. 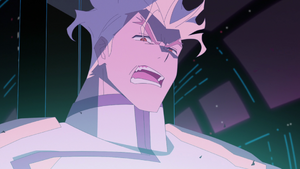 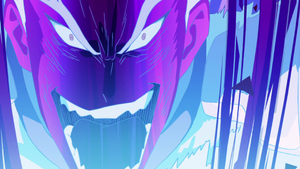 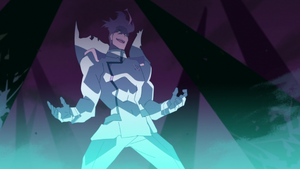 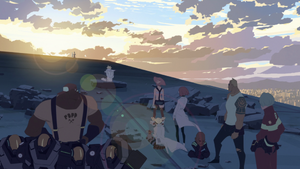 Kray's defeat in the aftermath.
Add a photo to this gallery

Retrieved from "https://villains.fandom.com/wiki/Kray_Foresight?oldid=4351661"
Community content is available under CC-BY-SA unless otherwise noted.