Snitching on his customers.

Domingo Gallardo Molina, or better known as Krazy-8, is the main antagonist of the first half of Season 1 of Breaking Bad, and a recurring character in Better Call Saul.

He was a meth distributor formerly associated with the Salamanca family, and later Jesse Pinkman. He is the cousin of Emilio Koyama.

He was portrayed by Max Arciniega.

Krazy-8 was born in Albuquerque. His parents own a local furniture store.

He began working as a meth distributor with his cousin Emilio Koyama. Krazy-8 is seen delivering cash payment to Tuco Salamanca but Nacho Varga stops Tuco and lets Krazy-8 go.

Krazy-8 delivers a cash payment while Hector Salamanca is watching but Nacho brings back Krazy-8 and beats him savagely.

The next week, Krazy-8 is still injured being beaten by Nacho. He delivers another payment to Nacho, who tells him that Krazy-8 gave him the right correct amount of cash and lets Krazy-8 go. Krazy-8, secretly a snitch to the DEA, reported the location of Emilio and Jesse's meth lab. It led to the bust of the lab and the arrest of Emilio and Krazy-8; unbeknownst to his business partners, Krazy-8 becomes a DEA informant to avoid going to prison.

Upon entering the meth trade, Walter White has his business partner Jesse Pinkman contact Emilio and Krazy-8, an old friends of his, to distribute their "blue sky" methamphetamine. They believe that Jesse set them up to be busted by the DEA, especially when they see Walt, who had been at the crime scene during a ride-along. A fight ensues in which Jesse is knocked unconscious, and Krazy-8 holds Walt at gunpoint. To save his life, Walt offers to show them how to cook meth, but in reality synthesizes phosphine gas with red phosphorus, causing a chemical reaction that kills Emilio and knocks Krazy-8 unconscious.

Walt and Jesse dissolve Emilio's corpse with chemicals, but are surprised to find that Krazy-8 is still alive. As Jesse disposes of Emilio's remains, he tells Walt to "deal with" Krazy-8, whom they have tied up in the basement of Jesse's house. Seeing that Walt is not an experienced criminal, Krazy-8 plays on his fear and compassion, telling him he doesn't have it in him to kill and promising he will not tell anyone what happened. Believing he has formed a bond with Krazy-8, Walt decides to let him go, and goes to the kitchen to make him a sandwich. Suddenly, Walt passes out on the floor, accidentally shattering the plate he had put the sandwich on.

When Walt regains consciousness, he tells Krazy-8 he has lung cancer, and Krazy-8 feigns concern for his health. Walt sees that a piece of the plate is missing, however, and deduces that Krazy-8 plans to stab him with it once he is freed from his restrained. As Krazy-8 reassures Walt that he is doing the right thing, Walt overpowers him and chokes him to death with a bicycle lock. He and Jesse then presumably dissolve his corpse with the same chemicals they used on Emilio. 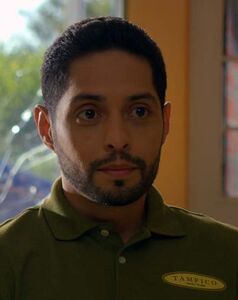